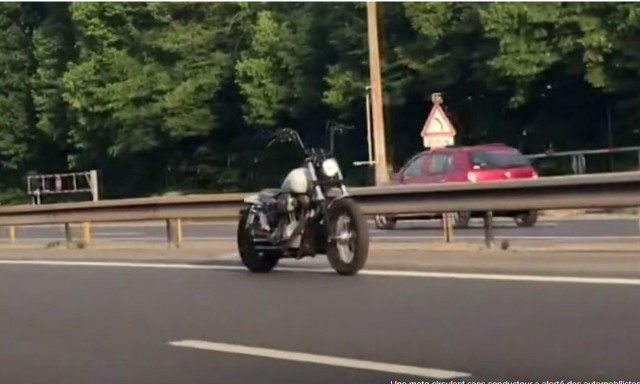 The bizarre scene was captured on May 28th, but it only emerged in recent days when it was published on Le Parisien news site's website much to the confusion and bemusement of all who watched the surreal clip.

The clip shot from a car whose driver who looked in his mirror and spotted the motorbike was cruising a little too close to the central reservation, albeit in a perfectly straight line.

When the driver slowed to take a closer look the driver was stunned to see there was no one riding the white motorbike as it drove along.

As there was no trace of the rider and no sign of an accident there was nothing to explain to freakish sight.

However the mystery has now been solved.

According to Le Parisien newspaper the rider had been involved in a minor collision with a car just seconds earlier that resulted in him being knocked him off his bike.

The rider suffered an arm injury, but his motorbike kept on rolling on. The driver of the car picked up the rider and they carried on in search of the bike but there was no trace of it. The driver then took the motorbike rider to hospital.

However several days later the driver received a call to say it had been recovered by police after it was found abandoned, a long way from the initial crash spot where it had been spotted.

It’s not known whether it continued on by its own means or a third party found it and moved it.

But as for how it was able to be riderless in the first place, motorbike specialists were not surprised.

“Because motorbikes have a low centre of gravity, it’s possible it can continue on its way,” Jean-Pierre Goy, a motorbike stunt rider told Le Parisien.

“It’s strange, but it can carry on for 500 to 600 metres. I’ve seen motorbikes carry one even longer than that, especially when they are in cruise control.”