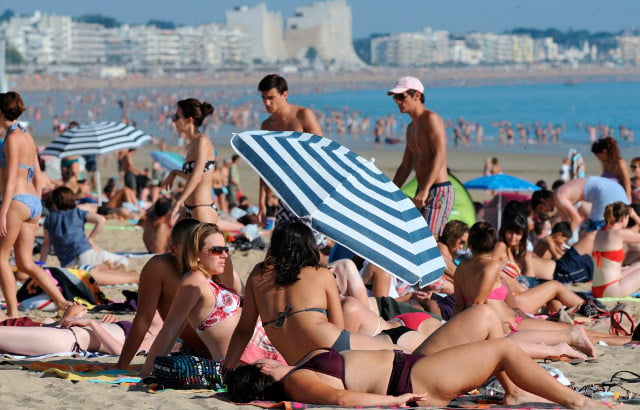 Photo: AFP
The heatwave that has affected most of the country since Saturday is set to continue for at least ten days, with temperatures expected to reach up to a scorching 35C-38C in Provence in southern France.
The hot weather could even put the month in the top three hottest Junes on record, according to France's weather agency Météo France.
“We're expecting a week-long heatwave,” Christelle Robert, meteorologist for  Météo France told L'Express newspaper. “We're expecting the heat to hit its peak at the end of this week with temperatures averaging 29C across the northern half of the country and 33C in the south. This is above the normal average for the season and for a good ten days or so.
“It's possible that this June will be one of the hottest we've seen,” she added. “It could make the top 3”.
People were reaching for the suncream in Paris on Sunday as the mercury exceeded 30C but the peak of the heatwave is expected to hit across the country towards the end of the week.
READ ALSO Map: Meteo France
Temperatures in Lyon, capital of France’s Auvergne-Rhône-Alpes region in southeastern France, are likely to exceed 30C on Saturday while in the southern city of Toulouse the mercury looks set to hit 31C on Sunday and predictions are for a scorching 32C in the southwestern city of Bordeaux.
France's weather has been up and down in recent weeks after record temperatures were recorded during May's Ascension bank holiday weekend, the country cooled right down during the first week of June before the current highs set in.
The exceptional temperatures recall the heatwaves of 1996 and 2003.