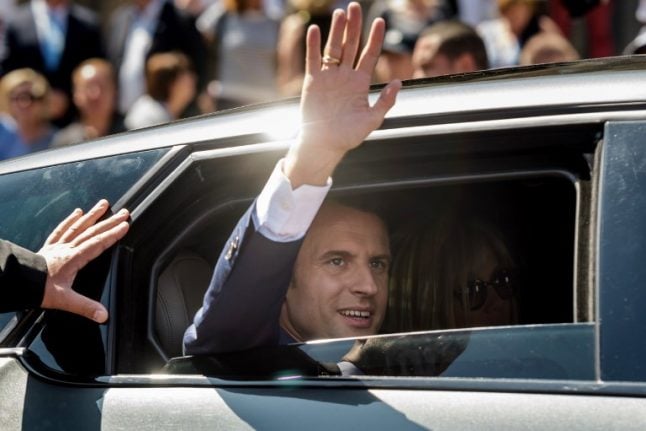 However the one downside for Macron was that voter turn-out was only 50 percent, the lowest since 1958.

We won't know how many seats Republique en Marche 5REM) will obtain until next Sunday's second round vote, but early projections by pollsters Elabe suggest Macron's party could end up with as many as 445 seats in the 577 seat parliament. That would easily break all previous records.

In a statement sent out after the results, REM party president Catherine Barbaroux thanked voters saying “their choice has a clear meaning: they want the action taken by Emmanuel Macron, since his election to the Presidency of the Republic, to be continued.”

REM party spokesman Christophe Castaner played it cool saying “nothing has been won yet.”

The initial projection for the second round showed Macron's party will gain between 415 and 445 seats, which if correct would give the new president huge power over the National Assembly. In terms of the other parties the same projections suggest the right wing Republicans party will obtain between 80 and 100 seats, the National Front will only pick up between one and four seats, France Insoumise, between 10 and 20 seats and the Socialist party and its left wing allies between 30 and 40 seats.

All other parties will be disappointed with those kind of projections for differing reasons, but given Le Pen came second in the presidential election where she scored over 10 million votes, the idea that her party will only pick up four MPs will be bitterly disappointing to National Front party chiefs.

The National Front had initially hoped for 15, which means they could form a parliamentary group, which would enable them to access more financing and have more speaking time.

“We can't allow REM to have 400 deputies. We need a massive mobilisation for the second round,” he said admitting that “we've maybe been disappointed by the score and we have paid the price, I think, for a low turnout.”

Marine Le Pen, who is standing as an MP in northern France was ahead after the first round after scoring 45 percent of the vote.

Socialist party big wig Jean-Christophe Cambadelis recognised the “unprecedented retreat” of the Socialist party but argued it would be a bad result for democracy in France if Macron, who scored 24 percent in the first round of the presidential elections, benefited from a “monopoly on democratic representation”.

However many may once again question the legitimacy of Macron's success given that only one in two voters took part in the first round of the elections, according to estimations.

Participation rates for the parliamentary generally show a big drop in participation compared to the presidential elections however in 2012 the turn-out rate was up at 57 percent.

The sovereigntist Nicolas Dupont-Aignan, a former presidential candidate said the low turn-out “seriously undermines the legitimacy of the future parliament.” Macron has enjoyed a smooth start in the five weeks since he beat far-right candidate Marine Le Pen to become France's youngest-ever president, naming a cabinet that crosses left-right lines and making a big impression at international summits.

His untested Republique en Marche (Republic on the Move, REM) party, which he only founded in April 2016, needs a clear majority in the National Assembly for him to push through the reforms he has promised.

The party has already had a boost after its candidates came first in 10 of the 11 French overseas constituencies that voted before the mainland.

French voters have traditionally rallied behind their new leader in the legislative elections that follow the presidential ballot.

REM reflects the president's desire for a new brand of politics.

Initially dismissed by Macron's opponents as a movement of young activists without any real roots, it will field 530 candidates on Sunday.