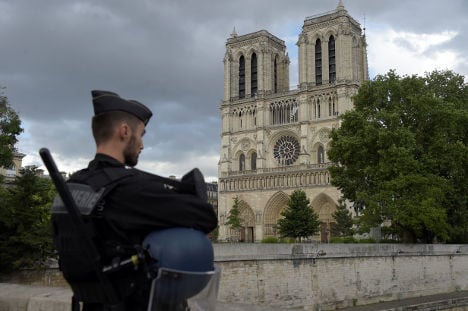 The 40-year-old, identified only as doctorate student Farid I., was shot and wounded by another policeman during Tuesday's attack in which he shouted: “This is for Syria”.

The attack sparked panic among tourists at the popular attraction.

Paris prosecutor Francois Molins said the suspect was an educated man who under questioning told investigators he had radicalised himself over a period of 10 months.

Examination of a laptop and four USB keys found at the man's apartment in Paris revealed a “lone wolves' manual” compiled by Isis, the prosecutor told a press conference.

Investigators also found photographs of the last week's jihadist attack in London in which eight people were killed and videos “glorifying” earlier attacks in Paris and Brussels.

“He had never shown any sign of radicalisation to those close to him, he had never been convicted, he was unknown to the intelligence services and so far, no signs of contact with anyone in Iraq or Syria have been found,” Molins said.

“He therefore appears to have the profile of a neophyte that the services fighting terrorism fear as much as hardened cases,” he added.

“It shows the diversity of profiles and that anything is possible.”

The prosecutor confirmed that the man had recorded a video pledging allegiance to Isis. He had opened an account on the Telegram messaging service, but did not appear to have contacted anyone.

Other jihadist suspects in France have been piloted through Telegram messages sent by jihadists in Iraq and Syria, but there was no sign it had happened in this case.

The man, who received hospital treatment for a gunshot wound to the leg, is to be charged with attempted murder.

He had approached a group of police officers outside Notre Dame and suddenly aimed a hammer at the back of the head of one of them.

Alerted by one of his colleagues, the policeman was able to bend partially out of the way, avoiding a harder and potentially more harmful blow, the prosecutor said.

The man was found to be carrying kitchen knives.

France has been repeatedly targeted in jihadist attacks since 2015. In the bloodiest attack, 130 people were killed in Paris on November 13th, 2015, in carnage claimed by Isis.

France is part of the US-led international coalition fighting Isis and has carried out air strikes against militants in Syria.

Around 50,000 police will provide security for the first round of parliamentary elections on Sunday.