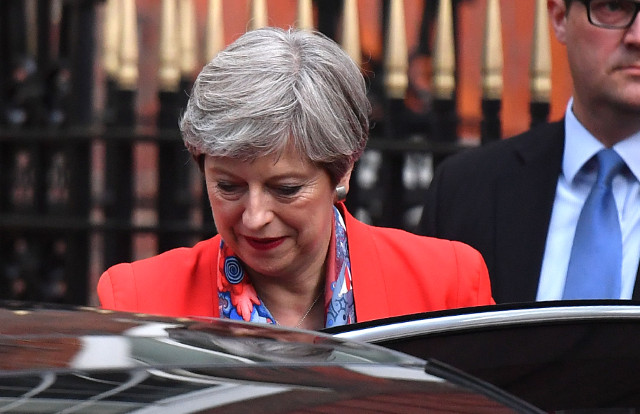 The top news story in France on Friday morning was of course all about the elections.

Not the French parliamentary elections on Sunday but the ones across the Channel where Prime Minister Theresa May failed to win an outright majority.

That result took France and its leaders by surprise with the press asking the same questions as their UK counterparts over Theresa May's future in the light of what has to be seen as a big failure for her Conservative party.

“Theresa May's fate is in suspense,” headlined Le Figaro, which like most media also headlined on how May had lost her high risk gamble. Those on the left in France such as defeated Socialist presidential candidate Benoit Hamon were quick to congratulate Britain's Labour party leader Jeremy Corbyn, who defied critics and vicious personal attacks in the press to gain seats.

“I send my congratulations to Jeremy Corbyn for the result gained by the Labour party in the British elections,” said Hamon, whose party look set to suffer a historic defeat in the French elections this month.

For his part French Prime Minister Edouard Philippe said Friday that the British election result was a surprise but did not change the country's decision to leave the European Union.

“The British have spoken, they have voted, and have given the Conservative party a majority, albeit a simple majority, which is something of a surprise,” Philippe told Europe 1 radio.

But he added: “I don't think we should read these results as calling into question the stance on Brexit which was clearly expressed by the British people.”

Philippe, who only took office in May, said the British election “had relatively little to do with Brexit and far more to do with domestic issues, for example linked to security” following the terror attacks in Manchester and London.

“I don't think we can read anything into this vote than a desire expressed by the British to choose the Conservative Party, but with less intensity than we thought beforehand,” he said.

However British nationals living in France were reading plenty into the election result.

Members of the anti-Brexit Remain in France Together Facebook group suggested the result would scupper Theresa May's plans to bring about a so-called hard Brexit.

“Looks like we've done it. Hard Brexit off the table. Theresa May is finished. This, if confirmed is the best news ever,” posted one member.

Kalba Meadows who founded the group said: “It's not yet clear to me (or probably to anyone else 😉 ) how the UK is going to be able to go into the [Brexit] negotiations in 10 days with a clear mandate. Yet the clock is ticking, and the two-year period won't be extended.

But it's still, I think, the best result that we could have hoped for, and we should all be proud that we've played our part in making it so.”

Although others suggested the result was not that positive for anti-Brexit expats in France, especially given the fall in the pound against the euro when it became clear the Conservatives would not have a majority.

Brits living in France, especially pensioners who receive their income from the UK in pounds have been hit hard since Brexit as the pound has tumbled from €1.34 to €1.13 on Thursday night.

“This is the worst of all possible results,” said one member of RIFT.

“Tories too strong to be out but too weak to govern properly or choose a better leader. Uncertainty making a big dent in my pension euros.

“It could make a flounce-out of the EU with no deal more likely in my opinion.”