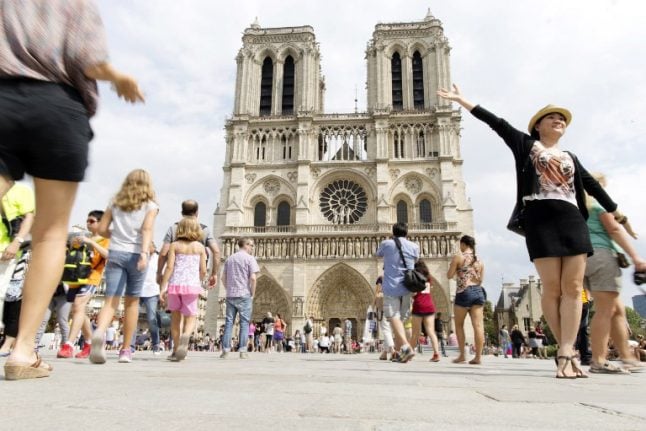 The hammer attack on a policeman at Notre-Dame Cathedral in Paris on Tuesday was fairly minor compared to other recent terrorist incidents, notably those in London and Manchester.

Even though no one was killed the fact that it took place at one of Paris’s most famous tourist spots and led to over 1,000 tourists being locked inside the cathedral until the all clear was given, will once again have the French capital’s tourist industry chiefs fretting.

The photographs of hundreds of people with their arms raised in the air as they sat on Notre-Dame's pews as police searched for weapons, were broadcast around the world.

Police ask people inside Notre-Dame Cathedral to raise their hands after a man attacked a police officer nearby https://t.co/QLW9Gzz3xx pic.twitter.com/4SfnT50WW5

They were just the latest images taken after a violent incident at one of the French capital’s most iconic landmarks.

Less than two months ago, on April 20th, it was images of armed officers and the blue flashing lights of police and ambulance vehicles on the Champs-Elysées that were beamed around the world.

On that night an attacker, a known criminal who had already tried to kill police in the past, had shot dead a French policeman and left two others seriously injured. In February there were similar scenes at the Louvre museum, the world’s most visited art gallery, after a man launched a machete attack on patrolling soldiers. That’s not to mention the string of devastating attacks in 2015 that left nearly 150 dead in the capital. They are still fresh in the memory.

Although no tourists or members of the public were killed in three recent attacks the potential damage to the city’s tourist industry and reputation is clear.

Some tourists caught up in the security scare was enough of a shock to make them reconsider their plans in the French capital.

Alberto Loor, a 34-year-old Ecuadorian and Maria-Jose Di Mora, 28, were wrapping up their honeymoon in Europe. After the attack they decided to shorten their stay in Paris, without even a visit to the Eiffel Tower.

“It's very scary, we've never lived something like this”, she told AFP. “You feel a threat for your life”.

There was a similar reaction by some tourists after the Champs-Elysées attack in April.

“I just want to go home,” a 34-year-old Australian tourist named Isabel said at the time.

In 2016 Paris suffered a huge drop of 1.5 million tourists as fears linked to terror attacks scared off visitors. Another report found that Paris tourism has lost €750 million since terror attacks.

The president of the region's tourist bureau called it an “industrial catastrophe”.
While tourist numbers picked up towards the end of the year France's government is well aware that tourists are being scared away, and met in November to discuss tourism for the first time in 13 years.

The government was prepared to spend €42 million on measures to woo visitors back, and the top of their agenda was security – with around €15 million to be dedicated to making visitors feel safer. One project will see a bulletproof glass wall built around the Eiffel Tower. Paris mayor Anne Hidalgo also revealed in February how she plans to make sure Paris retains its title of the most visited city in the world.

Paris will once again welcome millions of tourists once again this summer and it’s understandable that many might feel a little jittery.

Here at The Local we often receive messages from concerned readers asking us if it's safe to visit Paris.

We simply say that we feel safe living here and remind them the chances of being caught up in a terror attack are still incredibly slim.

It's also worth noting that in each attack at the three Paris landmarks it was the police and soldiers on the front line who were targeted, not the tourists.

Each incident was over in a matter of seconds even if the over-dramatic rolling TV coverage made out they lasted for hours.

Visitors to Paris can expect to see a huge police presence this summer, as was the case last year, where armed officers will patrol events like the Paris beach festival.

But as some of our readers point out, you’ll soon get used to the sight of armed police and soldiers. They are there more to reassure you than to prevent a specific threat against the site you are visiting.

“Police/military are everywhere in France, usually in groups of 2-4,” said Todd DeLong on The Local’s Facebook page.

“After a while you kind of don't even notice them. I felt safer there a few weeks ago than this past weekend in Washington DC.”

Monique Seccatore Correa agreed: “The police presence there doesn't bother me. We were at an Airbnb walking distance to Notre Dame last summer. That area is saturated with police and military vehicles. Will still go back.”

One person visiting France right now is Veronique Cauquil Savoye, the writer behind the French Girl in Seattle blog.

“The question is: ‘Are you going to hide under your bed until [the terrorist attacks] stop or go on living your life?’ I choose the latter, but that's a personal decision.

“Besides, I don't consider the country I live in now (the US) safer than France. I just had a wonderful day in downtown Paris and currently riding the public transportation back to my parents' place in the suburbs.

“I am planning to do more of the same until I fly back to Seattle later this week. So many café terraces, so little time…”.