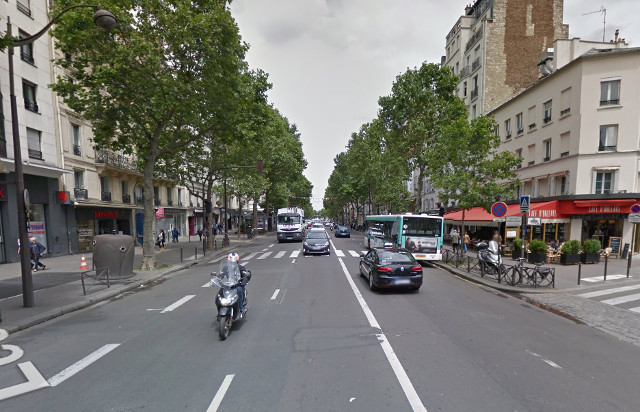 Avenue Général Leclerc will be the first testing spot for the new surfaces Photo: Google maps
Paris residents and visitors are often heard complaining about the noise from the city's streets keeping them awake at night.
Much of it is created by sound of car tyres rumbling over ancient cobbles or pot-holed roads.
But there may be a solution on the horizon.
The city is to test three new road surfaces that could cut noise from traffic by as much as 50 percent. And for those that suffer in the city in summer, the state-of-the-art surfaces are also designed to reduce heat during hot periods.
The project, which will cost a total of €2.9m, will test road surfaces with “sound and thermal qualities and acceptable durability”, in an attempt to fight noise pollution as well as battle the effects of climate change.
The surfaces are designed to refresh the air by retaining water, city authorities said on Tuesday, adding that the tests will also trial the use of different colours in bouncing back the light from the sun which could cut down on heat.
Paris can be a miserable place during a heatwave due to the fact it can be 2 to 3C warmer than surrounding areas due to the extra heat created by human activities, including traffic.
READ ALSO: Photo: AFP
After voting in favour of an agreement with the European commission, authorities in the French capital received €1.35m of funding from the EU Life environmental programme, which goes a significant way towards financing the total cost needed to for tests to be carried out in three different locations across the city.
“Pollution is a major public heath problem. Around 22 percent of Parisians are affected by noise, particularly noise from street traffic,” Célia Blauel who is in charge of environmental concerns at Paris City Hall.
“As for climate change, a study appeared this weeking showing that the most dense cities could expect to see a rise in temperatures of 8C before 2100 if nothing is done to prevent it,” she added.
The first street earmarked for testing is Avenue Général Leclerc in the 14th arrondissment, home to the city's famous Montparnasse district, where 400m of road will be laid with the new surface .
The EU funding will be supplemented with contributions from the city of Paris and non-profit environmental organisation Bruitparif, as well as French civil engineering firm Colas and French transport company Eurovia.