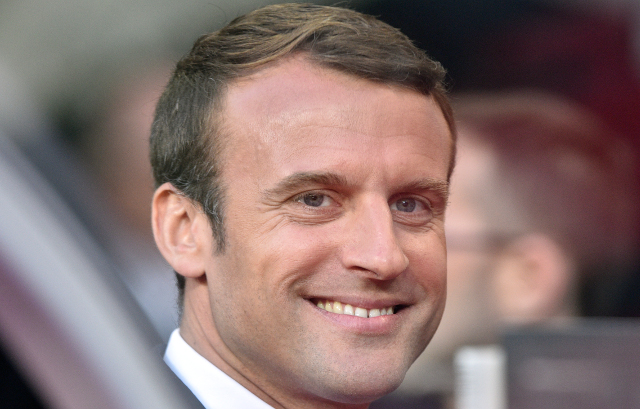 Photo: AFP
Macron has moved fast since he was inaugurated on May 14, meeting German leader Angela Merkel, making a high-profile debut at international summits with a white-knuckle handshake with US President Donald Trump and talking tough to Russia's Vladimir Putin.
When Trump announced Thursday he was pulling the United States out of the Paris climate accord, Macron led European condemnation, reworking one of Trump's own phrases by saying in English: “We all share the same responsibility: make our planet great again.”
At home, the 39-year-old centrist kept an election pledge to appoint a cabinet of politicians from the left, right and centre that crosses party lines.
The only hitch to Macron's smooth start has been the controversy engulfing one of his newly appointed ministers, Richard Ferrand, who is being investigated over a property deal.
READ ALSO: Photo: Screengrab France24
For days Ferrand, who has responsibility for territorial cohesion and was one of Macron's early backers, has rebuffed calls to resign over allegations of favouritism towards his common-law wife in the deal with a health insurance fund.
Prosecutors have announced a preliminary probe into the affair, adding to the pressure on Ferrand. But so far it does not appear to have hurt Macron.
On the day the investigation was announced, the government felt confident enough to go ahead with presenting its proposals to clean up politics.
Parliamentary elections now loom on June 11 and June 18. Macron, who had not even stood for elected office until he became president, needs a majority if he is to implement his ambitious reform agenda.
Giving the impression that he has the Midas touch, a poll Friday showed Macron had stretched his lead for the elections as voters continued to abandon traditional parties for his centrist Republique En Marche (Republic on the Move, REM) party, which he only founded in April 2016 as a vehicle for his presidential bid.
The survey of nearly 15,000 voters by Ipsos Steria for the Cevipof research institute showed REM surging ahead to 31 percent in the first round, up from 24 percent in late April.
The right-wing Republicans — who had been hoping to stage a comeback in the election after their scandal-hit presidential candidate Francois Fillon crashed out in the first round — are trailing on 22 percent.
The Socialists of Macron's predecessor as president, Francois Hollande, stood a distant fifth with 8.5 percent.
'Strong goodwill'
The far-right National Front (FN) of his vanquished presidential rival Marine Le Pen was meanwhile down three points on 18 percent.
Frederic Dabi of the Ifop polling institute said Macron was benefitting from “very strong goodwill”.
“It is striking that apart from with supporters of the National Front, Macron is leading everywhere, including on the right where he is getting 80 percent of favourable opinions,” Dabi told AFP.
Another poll, of 1,940 voters by OpinionWay poll published Thursday, showed REM winning between 335 and 355 seats out of 577 in the National Assembly — well over the 289 needed by Macron to push through his ambitious agenda.
“I expect Macron to get a very clear majority,” Jerome Sainte-Marie, a political scientist from PollingVox, said.
Macron's party was profiting from “the absence of a unified opposition, with four differently-sized and highly-divided political parties”.
Not only has Macron poached leading figures from the right and left, some of those who have not yet crossed over have said they are prepared to support at least a chunk of his programme.
“He has skilfully met the hopes of the French people for a unity government,” Sainte-Marie said.