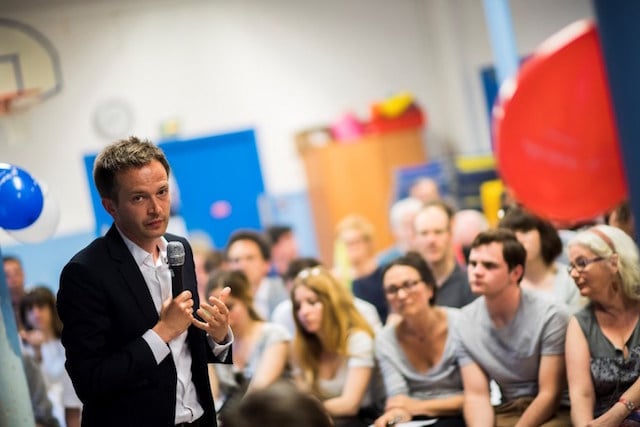 Les Republicains party candidate for the upcoming legislative elections in the 18th district of Paris Pierre-Yves Bournazel speaks during a meeting with supporters of the Republique En Marche party on
Welcome to campaigning in Emmanuel Macron's France, where moderates of the left and right are hitching their wagons to the new president's star in the hope of winning a seat in upcoming parliamentary elections.
“These days, what counts in a pot of yoghurt is the taste, not the label,” said Pierre-Yves Bournazel, who is running for a seat in Paris for the conservative Republicans in the two-round vote taking place on Sunday and on June 18th.
Bournazel is campaigning in the Montmartre area to the north of the French capital, in the shadow of the hilltop Sacre Coeur church that attracts crowds of tourists.
READ ALSO:
At 39 — the same age as Macron — Bournazel echoes the desire of France's youngest ever president “to promote new ideas and a new type of political behaviour”.
His leaflets says he wants to help form a “presidential majority”, meaning that although he is running on the Republicans ticket Bournazel would support many of Macron's reforms in parliament.
His stance — that of dozens of candidates from the Republicans and rival Socialists — reflects the tectonic political shift engineered by Macron, which has left the two major post-war political groupings fighting for survival.
Riding Macron's coattails
Macron has dismissed the traditional left-right divide as old hat, saying the new faultline in French politics is between “progressives” and those opposed to change.
To drive home that point he has given politicians from the Socialists and Republicans jobs in his new government, deepening the rift within the parties between those who oppose Macron and those seduced by his pragmatism.
In Montmartre, Bournazel's main opponent — Socialist former labour minister Myriam El-Khomri — is also running as someone who would work “with Emmanuel Macron, for a (parliamentary) majority of progress”.
The Socialist logo is tucked away at the bottom of El-Khomri's campaign poster and the party's trademark rose has disappeared, replaced by a Macron-style blue slick.
Explaining her position, the politician behind last year's highly contested reform of the labour code insists that while she is a “woman of the left” she also has “a real understanding of what a culture of compromise means”.
READ ALSO: Will Macron face French resistance with reform drive?
The attempts by the candidates to ride on the coattails of the president and his fledgling Republique En Marche (Republic on the Move or REM) party has bemused some voters.
“The most amazing thing is to see each of them explain to us that they are more 'En Marche' than the next person, when they have been part of their own parties for some time,” said Olivier, 49, a Macron supporter in Montmartre.
Unblocking France
El-Khomri's reluctance to fly her own party's colours is understandable.
The Socialists' presidential candidate, Benoit Hamon, scored a humiliating six percent and the former governing party has every reason to fear another rout in the parliamentary elections.
Another 15 Socialist candidates are also running under the “presidential majority” banner, irking their party which has accused them of “opportunism”.
READ ALSO: Defeated French Socialist Hamon to launch new leftwing movement
Macron, who had never run for office until he became president, needs a majority in parliament if he is to implement his ambitious reform agenda.
Many of his rivals scoffed when the supremely confident former Rothschild banker vowed he and his fledgling party would blaze a new political trail.
Yet having handed him the presidency in a May 7 runoff against far-right leader Marine Le Pen, voters are now changing their voting habits of a lifetime to back REM and its allies.
An Ipsos Steria survey of nearly 15,000 voters last week showed Macron's camp taking 31 percent in Sunday's first round of voting for the National Assembly, well ahead of the Republicans on 22 percent. Another poll showed him going on to win an outright majority of seats at the second round.
VIDEO: 'Make our planet great again' – Macron rebukes Trump (in English) for ditching Paris climate deal
REM is fielding candidates — many drawn from outside politics, including a former fighter pilot and female bullfighter — in almost every one of the 577 constituencies.
But in constituencies like Montmartre, where the frontrunners are supportive of the president's agenda, it has hung back.
“We are seeing a new polarisation of the French political landscape which is replacing the old left-right split in favour of a bloc which is more 'elite' and another that is more 'working-class',” political scientist Jerome Sainte-Marie said.
“The most liberal candidates on the left and right see in Macron the solution to bogged-down reforms,” he said.
“This ideological coherence is where Macron's strength lies,” he added. 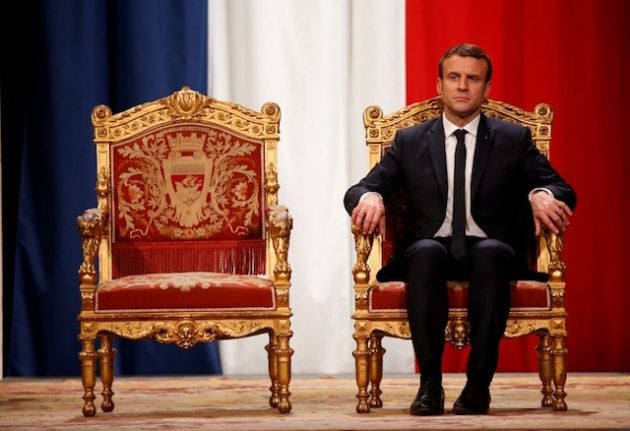 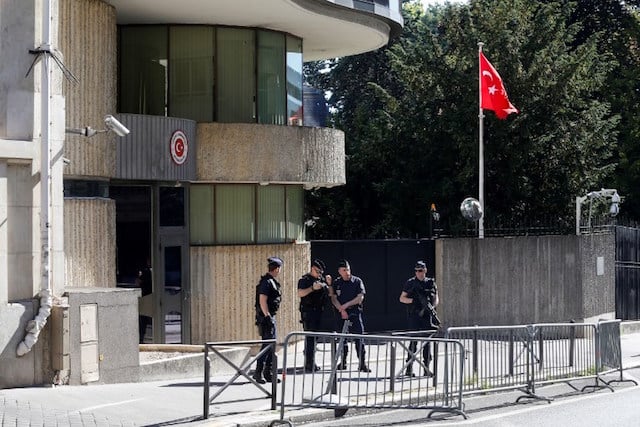