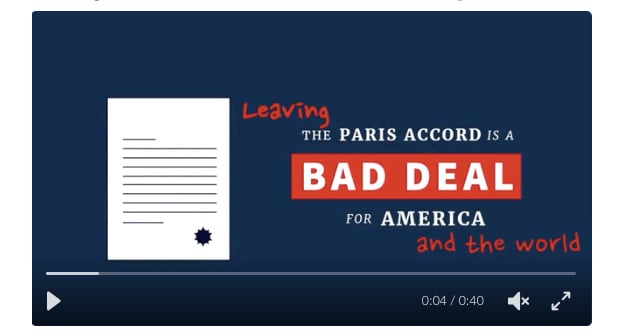 Credit: French Ministry for Europe and Foreign Affairs on Twitter, @francediplo_EN
The ministry issued a tweet with an embedded link to a video that amounted to a wry but very public rebuttal of Trump's assertions.
On Thursday, the White House had tweeted, “The Paris Accord is a bad deal for Americans,” and linked to a video which said the agreement “undermines” US competitiveness and jobs, was “badly negotiated” by former president Barack Obama and “accomplishes little.”
In its response, the foreign ministry tweeted, “We've seen the @WhiteHouse video about the #ParisAccord. We disagree — so we've changed it.”

We’ve seen the @WhiteHouse video about the #ParisAccord. We disagree – so we’ve changed it. #MakeThePlanetGreatAgain. pic.twitter.com/8A92MBwe6c

Its own video uses the same format — background, font, images and music — as the White House version but adds facts to debunk the White House claims.
It refers, for example, to major companies such as Exxonmobil and Microsoft which “disagree” that the accord will “undermine” US jobs, and quotes the Massachusetts Institute of Technology (MIT) on the urgent need to fight carbon emissions.
READ ALSO: Trump meets Macron, says whole world talking about win
The tweet includes a now-popular hashtag “make our planet great again” — a cheeky adaptation of the nationalist slogan used by Trump on his election campaign trail.
The video is also notable for being in English. France is famous for championing the use of the French language, and its leaders are always under pressure to speak only in French, even if they are fluent in English, when they are in the public arena.
But newly-elected president Emmanuel Macron, a 39-year-old former banker, has made a point of speaking in English, apparently seeking to make direct contact with a wider audience.
On Thursday, he released a video in English as well as French in which he criticised Trump for pulling out of the Paris accord and coined the “Make our planet great again” slogan.
READ ALSO: French president's trolling of Donald Trump delights the French AND Americans
He also invited American scientists, businesspeople and citizens who are frustrated by the White House's stance to “come and work here with us” on finding a solution to the climate crisis.
“They will find in France a second homeland,” Macron said.
His remarks were retweeted more than 140,000 times and “liked” by more than a quarter of a million users, according to Twitter figures as of Friday afternoon.