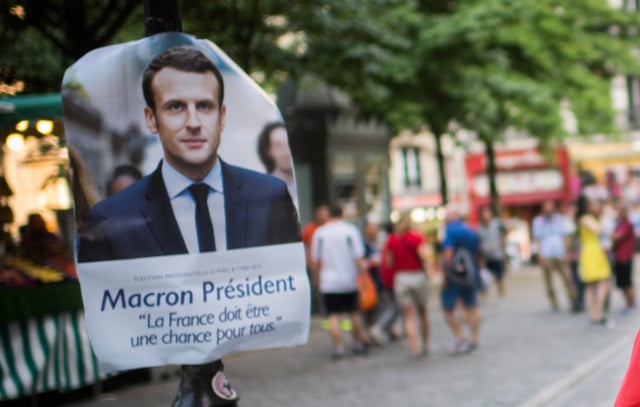 Alexander Holroyd, 30, (see photo below) a London-based French-British dual national is fighting to become one of 11 MPs to represent France's thousands of expats living overseas.

Holroyd, who worked in public policy in London and Brussels prior to joining Emmanuel Macron's En Marche! movement in the summer of 2016, is battling to become the MP for the “Northern Europe”  constituency which includes Britain and Scandinavia.

He told The Local in an interview during a trip to Copenhagen that it was Britain's shock referendum result on June 23rd last year that spurred him to join the Macron revolution, initially as a volunteer and then as a candidate for parliament.

“I thought if we have a surprise like Brexit in France, I would never forgive myself for just sitting on the sidelines,” he said.

“I felt the result emotionally,” says the parliamentary candidate, who describes himself as “profoundly pro-European” just like France's new president. While Macron stormed to a victory against Marine Le Pen in the second round of the presidential election on May 7th he faces crucial parliamentary elections this month in which he will hope to gain the majority he needs to get his planned reforms through parliament.

That may prove a tough task even though opinion polls are positive.

“If we fail to give a majority to the president the powers of the president are incredibly curtailed because of the way the constitution works,” he added.

While Macron won over 20 million votes, he can hardly claim to have a ringing endorsement from the French public given that around half of those who voted for him did so to block Le Pen and some 16 million French voters abstained.

Macron's planned remedy to solve France's economic ills, which include low growth and high unemployment, are inspired by a Nordic model.

He wants to free up the labour market and cut corporation taxes to boost businesses but at the same provide protection for those who need it.

Holroyd has been impressed by what he has seen when visiting French voters living in Scandinavia and believes the Scandinavian model is the right one to follow. “I’ve been inspired. I was in Oslo a couple of days ago, Stockholm yesterday and Copenhagen today. The simplicity and the digitalisation of all the procedures for things like passport renewal is absolutely inspiring,” he said.

“The whole point about having flexi-security within the labour force, more liberalisation of the labour force but done with more protection for those who fall between the cracks, and a very big investment in education and training,” said Holroyd.

“At the moment the French regime for unemployment for high earners is very generous. We want to cap the top end of that. But there’s a whole host of areas where we’re going to save or shift taxation.”

He, like other candidates for Republique en Marche are hoping voters back them the same way they did the president and he sees his election as part of Macron's drive to renew France's political class.

“The sense I get from everyone is that we’re beaming with pride to have this president,” said Holroyd. “And having gone around Copenhagen and Oslo, we’re welcome everywhere. I’m not exaggerating, there’s a real hope for Europe, and that’s a feeling we haven’t had for a long time in France.”

Macron won huge credit on both sides of the Atlantic on Friday for his response to Donald Trump's decision to ditch the Paris climate deal. He also won praise for standing up to Vladimir Putin.

“Macron's an enormous source of pride and of hope,” says Holroyd. “And it’s a hope that we desperately needed, and you can see the impact, even if there’s nothing legislative that’s been done yet. I think the momentum is itself bringing about change, before the actual legislative work starts, and that’s pretty spectacular.”