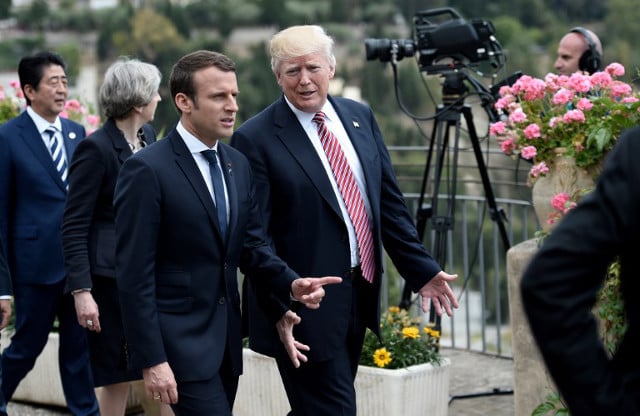 And cheekily adapting the nationalist slogan used by Trump on his election campaign trail, Macron urged defenders of the climate to “make our planet great again.”

In a TV address broadcast both in French and English (believed to be a first for a French president), Macron said he respected Trump's decision, “but I do think it is an actual mistake both for the US and for our planet.”

“Climate change is one of the major issues of our time. It is already changing our daily lives but it is global,” Macron said.

Referring to Trump's idea of redrawing the 2015 accord, he said, in the French version, “we will not in any way renegotiate an agreement that is less ambitious” than the present one.

“I reaffirm clearly that the Paris Agreement remains irreversible and will be implemented not just by France but by all the other nations,” Macron vowed.

He added: “To all scientists, engineers, entrepreneurs, responsible citizens who were disappointed by the decision of the president the United States, I want to say that they will find in France a second homeland.

“I call on them, come and work here with us, to work together on concrete solutions for our climate, our environment.”

“I can assure you, France will not give up the fight.”

Come here with us to work together on concrete solutions for our climate, our environment. pic.twitter.com/JXiqgMP8Xy

To all scientists, engineers, entrepreneurs, responsible citizens who were disappointed by the decision of the US: pic.twitter.com/qxjPX8MhKt

It's not the first time the French president has urged American scientists to come to France.

During his presidential campaign in February Macron told American academics and scientists from across the Atlantic who were at odds with the Trump administration that they would find a refuge in France.

“I want all those who today embody innovation and excellence in the United States to hear what we say: from now on, from next May, you will have a new homeland, France,” he said in February.

Macron said that he would move swiftly to define “a common strategy and to launch new initiatives” with France's partners.

“We will succeed because we are fully committed, because wherever we live, whoever we are, we all share the same responsibility: make our planet great again,” said Macron, tweaking the “Make America great again” slogan promoted by Trump.

One article in Le Point magazine talked of how Macron had made the French feel proud of their president again who had in just three weeks become the leader of the free world.

Meanwhile on Twitter the hashtag #makeourplanetgreatagain topped the trending charts as both French and Americans hailed Macron's trolling on Donald Trump.

There were also strong words for Donald Trump from Laurent Fabius who as France's former foreign minister was the head of the historic COP 21 deal reached in Paris in December 2015.

Donald Trump's decision to withdraw from the Paris climate accord is “shameful” and a “major error”, he said. “This decision, this speech, is a shameful mistake, a major error,” Fabius told France 2 television. He condemned the “lies” put forward on the subject by Trump.

Trump will never “destroy the Paris accord” which “was the best compromise possible,” Fabius said.

Trump announced Thursday that the United States would withdraw from the “bad” Paris accord, but would first seek to renegotiate the deal.

“I cannot, in good conscience, support a deal that punishes the United States,” he said, decrying the “draconian financial and economic burdens the agreement imposes on our country.”

“The creation of jobs in the fields of green energy will be greater than the job cuts in the obsolete sectors.

“He has an extraordinary arrogance this Mr Trump. He says 'I have a different opinion from the others, so all the others have to renegotiate'. But that does not exist. A renegotiation is out of question.”