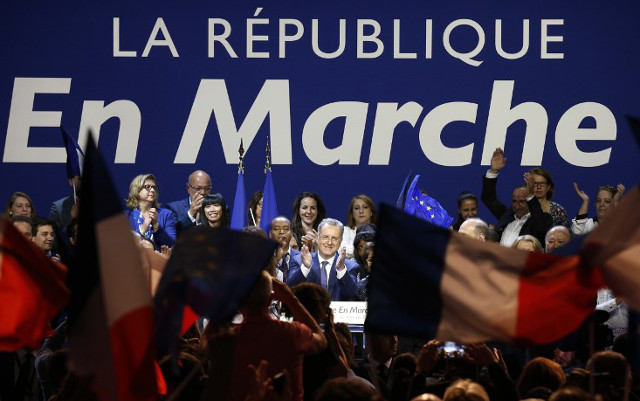 A poll by Ipsos Steria published by Le Monde daily showed Macron's Republique En Marche (Republic on the Move, REM) party and its allies surging ahead to 31 percent in the June 11 first round of the election, up from 24 percent in late April.

The survey of 14,958 voters showed the right-wing Republicans — who had been hoping to stage a comeback in the general election — trailing on 22 percent and the far-right National Front (FN) on 18 percent, down three points.

The biggest drop was recorded by the radical left France Unbowed of Jean-Luc Melenchon, which was shown winning 11.5 percent of the vote — down from 19.5 percent.

The Socialists of ex-president Francois Hollande were trailing a distant fifth with 8.5 percent.

An Opinionway poll of 1,940 voters published Thursday showed Macron on course to pull off his audacious bid to win an outright majority with a year-old party packed with political newcomers. Opinionway's seat projection showed REM winning between 335 and 355 seats out of 577 in the National Assembly — well over the 289 needed by Macron to avoid being hamstrung in implementing his ambitious reform agenda.

The poll showed Macron scoring 29 percent in the first round — apparently unharmed by a scandal engulfing one of his ministers — ahead of the Republicans on 20 percent and Marine Le Pen's FN on 18 percent.

The polls did not provide estimates for the second round on June 18 where two, three or even four candidates will face off in constituencies where no candidate won 50 percent.

Before the presidential election Macron's rivals had predicted that the former economy minister, who had never held elected office, would struggle to win a parliamentary majority.

But the polls showed the 39-year-old continuing to wrong foot naysayers, swept along by a deep desire for change that has seen a growing number of voters spurn traditional parties of the left and right for the centre.