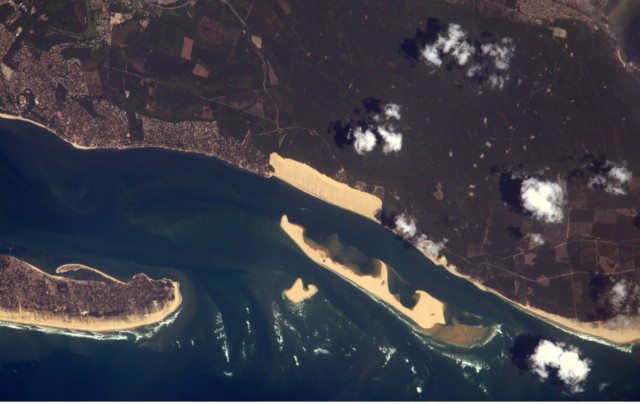 Do you know which famous site in France this is? Photo: Thomas Pesquet
French astronaut Thomas Pesquet left Earth in mid-November 2016 on a 196-day mission on the International Space Station. On Friday he's coming back down to earth.
Thankfully for us earthlings, the astronaut proved to be a keen social media user during his trip.
His photos of France from above the earth gave the French a new look at their country.
Here are some spectacular images he captured of France while he was up among the stars.

A last picture of @Paris from the side…but you can never go wrong with Paris! Guess what time it was by the shadows #workitoutlikeadetective pic.twitter.com/j5CHNsrQFu

Seine-Maritime, where I grew up and 90% of my family lives! Could never have imagined that I'd one day see my home region from this high up pic.twitter.com/8XozlXbaGL

Le Mont Saint Michel again, but a better picture. There is so much to see and six months is not enough time! pic.twitter.com/wxWx2fHU6i

Going on a #spacewalk requires many weeks of planning on Earth, and many hours preparing the spacesuits and tools pic.twitter.com/iv30hKBdFL

Closing in on #Paris, not zoomed in enough, but spreading from Orly to Roissy airports, the city of light is aptly named. Happy New Year! pic.twitter.com/JCONbjKj2g

This must be @Marseille! A little southern Sun in the @Space_Station with sunlight reflecting off @OM_English stadium pic.twitter.com/lt7nVoMNIN

The estuary of the Gironde in Nouvelle-Aquitaine – the 'Mouth of France' – seemed to smile at us as we flew over it https://t.co/e3uYJLN8jV pic.twitter.com/99kLtCinfY

Not every day do you see all the #Alps in one glance. Well, except on the @Space_Station, of course 😉 https://t.co/SBifmQyJiR #Proxima pic.twitter.com/Kc82RSTn6E

Hello @Bordeaux! Some of my family enjoy your way of life year-round. I get a 2 minute glimpse of you flying at 28 000 km/h pic.twitter.com/6tg8fqFogL

The #Jura mountains swimming in the clouds https://t.co/Il2IkjNMU3 #Proxima pic.twitter.com/L3iOjWh0vL

The southern half of #France seen from the west. #Bordeaux to #Marseilles. Note the halo of the atmosphere at night. pic.twitter.com/r7aXXUzw9M

My native Seine-Maritime seems to open up the curtains to watch me pass! My roots are here: from the Seine's loops to the Channel's shores pic.twitter.com/vEMGKJw2V1

Taking photos from the @Space_Station: look out the window at the right time, compensate for the motion to get sharp shots and be creative! pic.twitter.com/CNdfuE1VIm

The photo below shows the town of Lorient in Brittany, western France.

The maritime city of Le Havre in my home region Normandy. Proud to say it's one of the greenest cities in France & 500 years old this year! pic.twitter.com/wlOZgJiPpb

L’île de Noirmoutier even though this was taken two months after the first picture, it looks less summery… https://t.co/qjC2dTg0CA pic.twitter.com/rAveRhZVO2

Mâcon on the Ain river, north of Lyon. #France pic.twitter.com/drB7UIZrIH

.. only to find it later. Success! This is the highest sand dune in Europe. Yes in #France we measure sand dunes 😉 https://t.co/1MNGNaYjXb pic.twitter.com/BruuvwJc7d