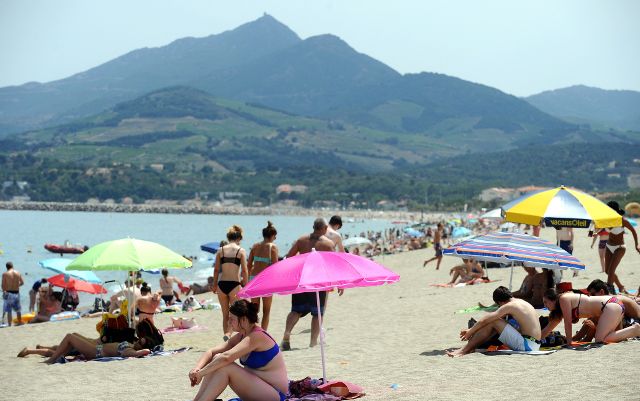 Photo: AFP
With much of France already used to blue skies and scorching temperatures after the record breaking weather during the May Ascension bank holiday, provisional forecasts suggest there'll be more need for the sun cream this summer.
According to meteorologists the country is set for a slightly hotter than average summer .
While the official first day of summer is June 21st, weather forecasters count the season as beginning on June 1st and lasting until August 30th.
And although they are unable to present detailed weather maps showing sun icons on every day for the next three months, weather specialists are optimistic.
“Climate models predict a warm summer with temperatures around 1C above seasonal averages,” said Pascal Scaviner, head of forecasting at French weather Channel Chaine Météo.
Jean-Michel Soubeyroux from national weather agency Météo France said: “Without being scorching, the summer holidays should, on the whole, see some beautiful weather, as seen in 2015, 2009 and 2006.”
The weather expert added the temperature this summer should be “0.7C rise on average summer temperatures”, that is linked to climate change.
Perhaps its hardly a surprise given the Météo France has already stated that we are likely to see more hot summers in future due to climate change.
READ ALSO: And while many may doubt the reliability of any long term weather predictions, forecaster and presenter at BFMTV, Guillaume Séchet told the tv news channel: “It's easier to take into account three whole months.
“It limits the prediction of anomalies, so we know if it will be a hot or cold summer, more dry or humid, but not if it will rain on July 14th at 2.30pm,” he said. But while the predictions are likely to delight many across the country, it isn't all good news.
Negative consequences such as drought could be one effect we see on the environment.
However according to Météo France any drought that does occur is unlikely to reach the levels of 2011 when records were broken.