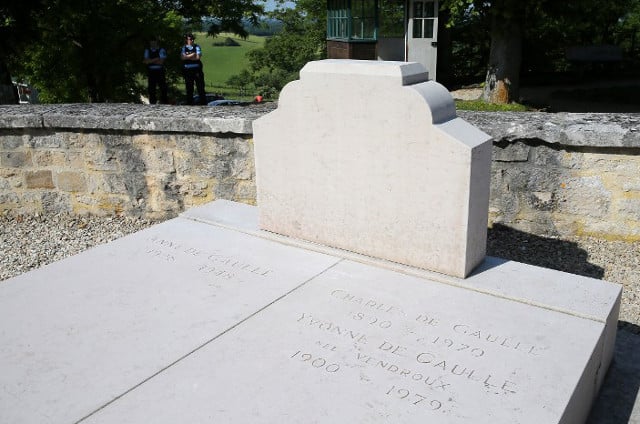 Photo: AFP
The motives of the man, aged in his thirties, remain unclear but he “regrets his deed,” prosecutor Frederic Nahon told a news conference.
The desecration of the grave in the eastern village of Colombey-les-Deux-Eglises on Saturday sparked outrage, not least because it occurred on a national day to commemorate the resistance.
The vandal, arrested on Tuesday in a nearby town, has grasped the “seriousness of his action” but otherwise said he does “not remember much”, Nahon said.
Surveillance cameras filmed him stepping onto De Gaulle's modest grave, then kicking the base of a stone cross at its head, causing the cross to topple over and strike the cemetery's low wall nearby.
The cross, which stood some 1.5 metres (five feet) tall, broke into pieces, while the gravestone itself was undamaged.
The individual, who has not been named, had drunk heavily during a family meal but did not have an alcoholism problem, investigators said.
He will be tried on Friday, with descendants of De Gaulle as civil plaintiffs.
The charges comprise theft, criminal damage and desecration of a grave, which carry a potential jail term of up to five years.
His girlfriend was also held as a suspected accomplice, but is unlikely to be tried, Nahon said.
The grave draws tens of thousands of visitors each year to the village of fewer than 700 inhabitants.
The main occasions are the anniversary of De Gaulle's death on November 9, 1970, and that of his call for resistance to the Nazi occupation of France on June 18, 1940.
De Gaulle led the Free French Forces in London from 1940-44 and reshaped the country's political landscape after the war, founding the Fifth Republic
in 1958.
He remains a revered figure to many French people. His newly-elected successor, Emmanuel Macron, was among those who expressed their indignation.
De Gaulle died in 1970 shortly before his 80th birthday. He is buried next to his wife Yvonne and daughter Anne.
The late president and general was buried “without flowers or wreaths” at his own request.