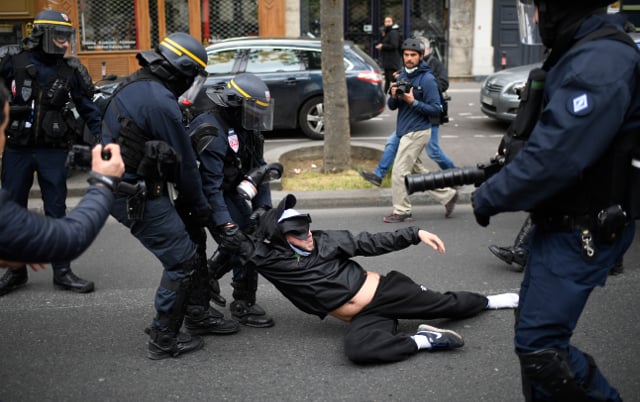 Photo: AFP
The powers, imposed after attacks in Paris left 130 dead in November 2015, allow security forces to monitor suspects and carry out searches without warrants, place suspects under house arrest, and ban public gatherings.
Since the state of emergency was declared, authorities have issued 155 decrees prohibiting public assembly, and imposed 639 measures preventing specific individuals from taking part in demonstrations, Amnesty said.
Of those, the majority targeted people protesting labour law reforms. A raft of measures were also brought in to curb demonstrations following this month's presidential elections.
“Emergency laws intended to protect the French people from the threat of terrorism are instead being used to restrict their rights to protest peacefully,” said Marco Perolini, Amnesty International's researcher on France.
“Under the cover of the state of emergency, rights to protest have been stripped away with hundreds of activists, environmentalists, and labour rights campaigners unjustifiably banned from participating in protests.”
The report “A right not a threat: Disproportionate restrictions on demonstrations under the State of Emergency in France” comes a week after new President Emmanuel Macron announced his intention to extend the state of emergency.
His Prime Minister Edouard Philippe said the terror threat remained “very high” after plans were announced to extend the emergency measures for the sixth time, until November 1.
Francois Hollande, president at the time the wide-ranging powers were introduced, declared that France was “at war” and deployed troops to patrol the streets.
READ ALSO: Large quantities of 'Jihadist drug' seized in France for the first time