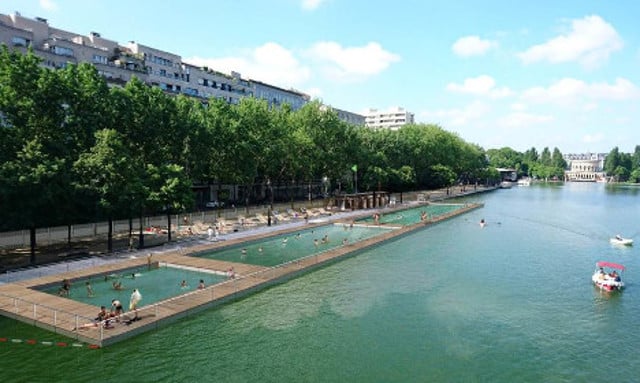 Photo: Paris City Hall
Paris Mayor Anne Hidalgo has promised Parisians they will be able to swim in the city's canal this summer after test results revealed the water is clean enough for health standards.
Paris authorities had already voted to allow free swimming in the Bassin de la Villette which links the Canal St Martin and the Canal de l'Ourq in the north east of the city and is one of the locations for the Paris Plages summer beach festival.
But the green light depended on whether the water was clean enough.
The results are in and it's good news for the city's swimmers, many of whom took a dip in the canal for a one-off “open day” last summer (see photo below). “The results show 15-20 traces of bacteria, while the top limit is 100 per millilitre,” said Celia Blauel who is in charge of waterways at Paris City Hall.
“We have been taking action for five years and the water is of a high quality,” she added.
That was enough for Hidalgo to tweet out: “We promised! From this summer for Paris Plages, you will be able to swim in the Bassin de La Villette.”

The Local understands the greater Paris region's health authority will still have to give the final seal of approval next month, but Paris authorities are convinced that by July 15th locals will be taking a plunge in the Bassin de la Villette, just as they did for one day in August last year.
How will it work?
In November last year, the City Hall officially proposed a plan for three swimming pools to be built along the south side of the Quai de la Loire in the 19th arrondissement, incidentally located right in front of The Local France's office. (Yes, we have no excuses not to dive in.)
The temporary structures will be built into the actual Bassin, which connects the Canal de l'Ourcq with the Canal Saint-Martin. The smallest of the pools will be for children and just 40 centimetres deep. Another will be up to 120 centimetres in depth, while a third will be reserved for swimmers at 2m deep.
The pools in total will stretch 90 metres end to end and measure 16m across. The City Hall estimates that around 1,000 people will show up to the pools on any given summer day.
It plans to take down the pools at the end of the summer period, with the hopes of setting them up again in the summer of 2018.
The Bassin de la Villette was inaugurated in 1808 by Napoleon Bonaparte and was a former port area during the industrialisation of rivers.
However these days it is the centre for numerous cultural events and has been well and truly gentriifed with numerous trendy bars and restaurants opening alongside the water.