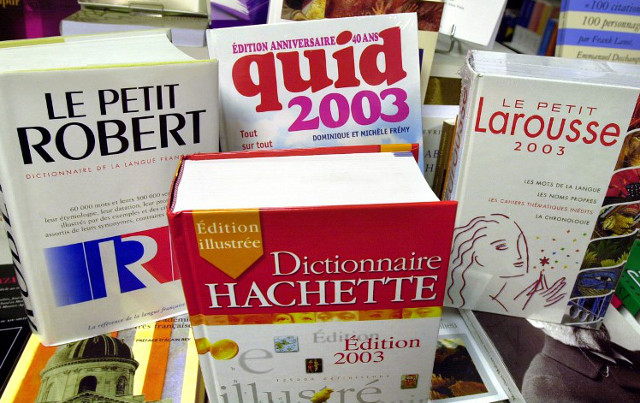 Photo: AFP
Good news for French-language learners – you'll soon be officially permitted to use a bunch of familiar words while speaking French.
France's two main rival dictionaries Robert and Larousse, are set to release their 2018 editions and have leaked a few of the new words that made the cut.
Le Robert has added 200 words while Le Petit Larousse will see an additional 150 words on its pages.
To qualify for the honour, the new entries had to be in popular use, be used frequently by the media and not at risk of falling out of use in the short term.
The influence of technology is clearly visible in this year's selection of anglicized French words getting the seal of approval.
With the words spoiler (usually a crucial bit of information that gives away the plot to a tv programme or film), googliser (to google), liker (to “like” something on social media) and retweeter (to retweet something on Twitter) joining the French language, younger generations of French and English speakers will have few problems understanding each other, at least when talking about the internet and social media.
Similarly, words inspired by English, such as hacktivisme (using technology to promote a political agenda) and uberisation (using web platforms that directly connect customers with the person providing the service to ensure lower costs than the traditional model), which have become common in France have been included in the dictionaries.
READ ALSO: Photo: Angel Martin / Flickr
Flexitarian used to refer to those who limit their intake of meat is another addition that reflects modern trends…although this time of a culinary nature.
Parisians in particular will be familiar with the word hipster meaning trendy youngsters who are increasingly seen in tribes around the French capital.
Naturally current affairs has affected the list of words to join the dictionaries with the controversial burkini — the Muslim swimwear that is still the subject of much heated debate in France — making it in there.
But some of the Anglophone words to join the dictionary aren't quite so contemporary.
Even though women have been suffering (mostly) in silence while wearing stilettos since the 1930s, the word is among the latest to join the newest edition of Le Robert. Photo: Bethantics/Flickr
And fashion fans may also be pleased to see that bomber — the iconic style of jacket named after the pilots that originally wore them — has also been made an official French word.
Not quite as old but still one older generations will have no trouble understanding — playliste has been added to the dictionary.
Music fans might also be surprised to note that 2018 is the year that gangsta rap will finally make its entry onto the hallowed pages.
And if words aren't your thing, Le Robert has also added a list of around fifty personalities to its pages.
This year's choices of English speakers are a reminder of recent blockbuster political events, with US president Donald Trump and British prime minister Theresa May making it onto the list.
But perhaps more surprisingly, US director of La La Land — the film which won six Oscars though famously not the presitigious Best Picture award — Damien Chazelle is in there.
Naturally France's new president Emmanuel Macron made it in but his prime minister Edouard Philippe might be offended for not being on the exclusive list.
Obviously not all of the words receiving official recognition by the dictionaries were taken from or influenced by English.
Post-vérité meaning “post-truth” refers to the political trend for valuing emotion over fact.
The trend for introducing English words to the French language is a controversial issue in France.
Where once French language authorities, for example the fabled Academie Francaise, were famously resistant to its influence, the overwhelming use of English online means that this traditional attitude is increasingly old fashioned.
READ ALSO: Are these the 23 'best' words in the French language?