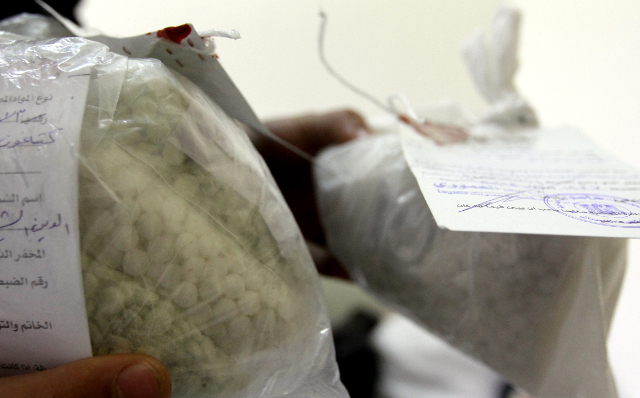 Photo: AFP
Captagon, a type of amphetamine, is one of the most commonly used drugs among fighters in the Syrian war.
“It is the first time that this drug has been seized in France,” the customs agency said in a statement.
Customs officials at Charles de Gaulle discovered 350,000 Captagon pills weighing 70 kilogrammes on January 4 hidden among industrial moulds exported from Lebanon and apparently heading for the Czech Republic.
An investigation was launched by German and Czech authorities “and it revealed that the real intended destination was Saudi Arabia, by passing through Turkey”, the agency said.
Another 67 kilogrammes of the drug were found at the airport in February, hidden in steel moulds.
Captagon is classified by the UN Office on Drugs and Crime as an “amphetamine-type stimulant” and usually blends amphetamines, caffeine and other substances.
Fighters who have taken the drug say it helps them to stay up for days and numbs the senses, allowing them to kill with abandon.
READ ALSO: 'Cocaine cruise ship' smugglers on trial for transatlantic hash and coke trade