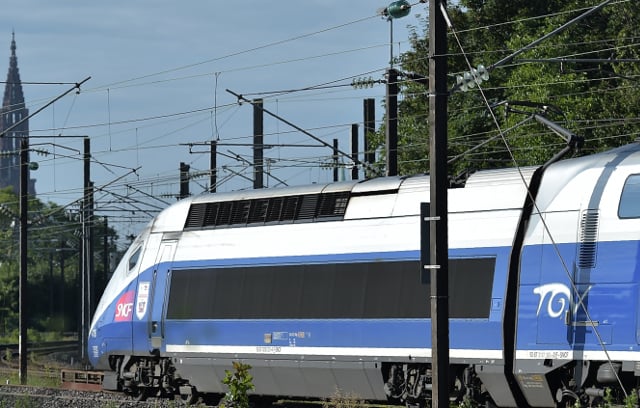 Photo: AFP
What's the story?
The TGV, France's famous high speed train service that was once and still is the envy of Britain, and many other countries for that matter, is changing its name.
The name change will be rolled out from July 2nd 2017, when trains on the new high speed service between Paris and Bordeaux will be the first to be named “inOui”. The new-look trains were unveiled in Paris on Monday.

The TGV trains on the new high speed Paris to Strasbourg service will be the next to be renamed until all TGV services are named “inOui” before 2020.
French rail chiefs SNCF expect that the inOui trains will have been rolled out across 80 percent of the service by the end of 2018.
READ ALSO: Photo: SNCF
What does the change actually mean?
The “inOui” service is essentially a rebranding, according to SNCF.
“We are simply baptising a service that doesn't have a name,” president of SNCF Guillaume Pepy said.
But along with the rebranding SNCF are rolling out new trains which is why it's going to take a few years.
“InOui” will refer to SNCF's premium high speed service that will offer passengers Wifi on trains, comfy seats, more space for legs and luggage and trains with restaurant cars among other things.
In reality the trains themselves will still be TGV's (which stands for “Train à Grande Vitesse” or  high speed train) so traditionalists who don't like the change can still say they are getting on a TGV.
But the name “InOui” will adorn the trains and all marketing. How much will it all cost?
The rebranding and upgrading of trains will cost SNCF €2.5 billion between now and 2020.
What about ticket prices?
“This does not mean a price hike — it's not about creating a luxury product,” SNCF boss Pepy said, highlighting the six percent reduction in fares since 2015.
Why the name 'inOui'?
Essentially it fits in with SNCF's branding of all its services around the word “Oui”, which as we all know means “Yes” in French.
The “In Oui” name aligns the premium high speed train service with the company's low cost equivalent, Ouigo, launched in 2013. It also fits alongside SNCF's coach service “OuiBus” and its hire car service “OuiCar”.
The booking website voyages-sncf.com will also be revamped and renamed oui.sncf.com.
But some have criticized the choice of name. Jean-Marc Lehu, a lecturer in marketing at Paris Sorbonne university believes that while the “Oui” might be OK for French clientele, it might not strike a chord with international customers.
But why now?
One of the reasons behind the move is that in 2021 SNCF will lose its monopoly of the TGV line and so the rail company is seizing the moment to boost its image.
As part of its image update, SNCF is aiming to attract 15 million new high-speed passengers before 2020 with its new improved  service, the company has promised. The current TGV service serves 105 million customers each year.
Head of SNCF journeys division (Voyages SNCF), Rachel Picard has talked of “a service transformation” with staff dedicated to “evolving the service and adopting a new position with the customers which is more attentive and considerate.” How have the changes gone down in France?
The response to the name change has been divided.
“It risks worrying travellers, that's for sure. TGV has been building a reputation for 40 years. If they want to add value to the TGV name, there are other things they can do, such as making sure trains arrive on time and aren't removed from the timetable” said Alain Patouillard, the president of a TGV association in Nice, southern France.
Some Twitter users have also questioned the rail company's move (see below) including France-based British author and journalist Peter Gumbel.

SNCF heads towards classic marketing #fail as it tries to rebrand its TGV into premium and low-cost. #overthinking https://t.co/6raOM0fDAD

But according to industry specialist Gilles Dansart, SNCF has not been left with much of a choice. “We have entered an era of extreme competition,” he said, naming France's successful long-distance car sharing company Blablacar, the country's new coach services and the legion of lowcost flights, among others.