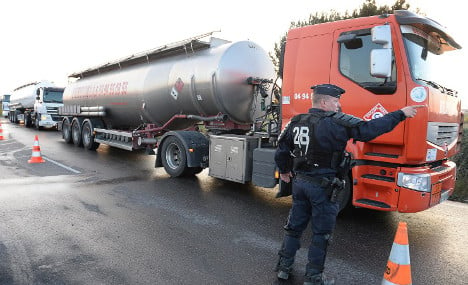 The tanker strike that began last Friday has up until now has been focused on the greater Paris region of Ile-de-France but it will expand across the country as of this Monday.

That’s according to the transport arm of one of France’s biggest and more hardline unions – the CGT, which claims up to 80 percent of fuel stations around the French capital could run out of stock.

The strike action, which has been called after union wage and working condition demands have not been met, concerns drivers responsible for delivering dangerous chemicals including fuel, gas and chemical products.
The leftist CGT Transports says that more than seventy percent of tanker drivers in Ile-de-France and in the west of the country took part in the strike at the weekend.
On Monday morning a refinery in Grandpuits in the Seine-et-Marne department near Paris was blocked, as was a depot in La Rochelle on the west coast.
'Stocks under control'
But UFIP, which representatives the petroleum industry in France says drivers should not panic.
It says that petrol stations are managing so far because they anticipated the strike and so took on extra stocks of fuel.
But in an ominous message the hardline CGT union, renowned in France for its militant protests and wildcat strike action says it will do whatever is necessary to get the principal road transport organisations to the negotiating table.
Drivers earning less than €10/hour
The CGT is seeking guarantees on a pay rise (up to €14/h), a reduced working week (10h max/day) and a 13th month bonus and claim they have not had an answer to their demands since May 10th.
“Drivers transporting 38,000 litres of fuel or 24 tons of acid, are paid €9.73 an hour,” a CGT document said.
It added these drivers are required to take exams in order to obtain the necessary certificates to carry out the work, and must retake these exams every five years.
This strike will raise fears of repeat of crippling industrial action in May 2016.
Thousands of French petrol stations faced complete or partial shortages following protests and blockades over the then government’s move to try to force through labour reforms.