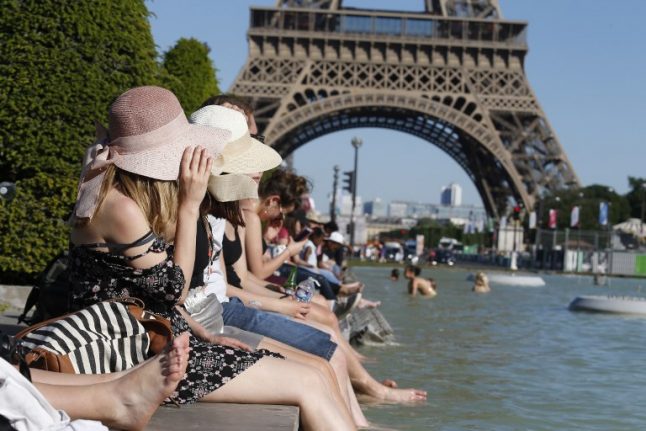 Photo: AFP
The French will be returning to work after a long holiday weekend and many will no doubt be sporting early summer suntans.
That's because the country has just enjoyed the hottest Ascension weekend, which began with the public holiday on Thursday, since the year 1900 when records began, according to the weather site La Chaine Météo.
The site says the average temperatures over the holiday weekend were 22.3C, compared to 17.2C on an average year and the previous record for the May Ascension weekend which was set in 1922, when the Mercury hit 21.9C. The mercury topped 30C in many parts of the country and even reached record highs in certain places for this time of year.
The town of Troyes in northeastern France broke the previous seasonal record of 30C from May 2005 when temperatures reached 31.3C on Saturday.
Similarly in the northeastern department of Ardennes, the mercury rose to 31C on Saturday beating the previous record of 30.7C.
But there were also records set out west in Brittany where the town of Brest where the thermometer rose ti 28.7C, beating the previous record of 28.6 for the month of May, set back in 2012.
But it wasn't just during the day that temperatures were abnormally high in Brittany. At night the mercury was 10C higher than normal for this time of year so don't be surprised if you found it hard to sleep.
CLICK HERE for a full list of where seasonal temperature records were broken around France.
Parisians were forced to experience the famously sweaty Metro system Saturday and Sunday in temperatures reaching 32C.
Although as the photo shows below many found ways to cool off, even jumping in the Trocadero fountains at the Eiffel Tower. (In the fountains at the Trocadero in Paris. AFP)
Some came up with an inventive solution for battling the heat, opening fire hydrants for some much needed relief. In the greater Paris region Ile-de-France, 300 fire hydrants were opened in a move the local fire service were quick to condemn as a “bad idea”. (The fountains in the south western city of Bordeaux. AFP)
But it wasn't only Parisians who were forced to find ways of dealing with the heat during the Ascension weekend, with people living in the southwestern department of Landes experiencing temperatures reaching a steaming 34C. (The packed beach at Marseille. AFP)
What's ahead? Temperatures are set to remain high in the coming days even as storms affecting large parts of the east and south of the country.
On Monday afternoon, those living in the historic regions of Alsace and Lorraine in the northeast will be forced to find some shade with temperatures set to exceed 30C and in Grenoble in the southeast the mercury will reach a sweaty 33C.
Between the Pyrénées, on the border with Spain in the south, and the Nord-Pas-de-Calais to the north, storms are likely to hit with the possibility of hail.
Temperatures could dip slightly on Tuesday and more storms are expected on Wednesday bu the thermometer will treise agaion on Thursday.
The heat is expected to hold up until the end of the week with temperatures forecast to once again nudge past the 30C on Friday in parts of the country.
But by next weekend temperatures will dip to average seasonal levels.