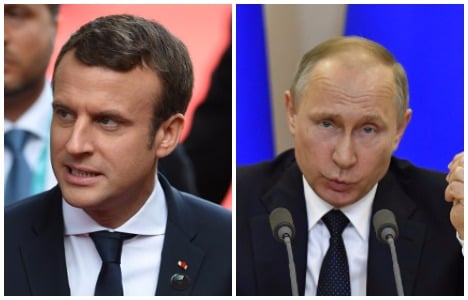 Coming just three weeks after an election in which the Kremlin was widely seen as backing centrist Macron's far-right rival Marine Le Pen – with Putin hosting her during a surprise visit to Moscow – the encounter in Versailles, near Paris, has an added personal edge.

As a candidate, Macron, 39, had tough words for Russia, accusing it of following a “hybrid strategy combining military intimidation and an information war”.

Since the start of the Ukraine crisis in 2014, Russia has flexed its muscles with a series of war games involving tens of thousands of troops in areas bordering Nato Baltic states.

Macron criticised Russia's 2014 annexation of Crimea and “shows of force in Syria or alongside our coastlines and airspaces, (and) the use of social media or state-controlled media to destabilise public opinion”.

But he said it was essential to “keep dialogue open with Moscow” – while government spokesman Christophe Castaner said Friday that “dialogue does not mean agreement”.

Putin adviser Yuri Ushakov has described the visit as an “informal” occasion that will nevertheless touch on some tough issues.

“France is among the countries with a very severe stance towards the regime of (Syrian President) Bashar al-Assad, so I think a discussion on this subject will be interesting and frank,” Ushakov told a Moscow news briefing.

The stakes are high for Russia, said Fyodor Lukyanov of the Council on Foreign and Defence Policy. “It's obvious that the Russian side wants to break the impasse,” he told AFP in Moscow.

“One shouldn't expect anything from this visit,” he added, however. “It's a matter of the two leaders getting to know each other and to create a positive ambiance – or not.”

Putin, 64, was quick to congratulate Macron on his election, urging him to “overcome mutual distrust” and “join forces to ensure international stability and security”.

The visit comes seven months after the Russian leader cancelled a trip to Paris for the opening of a Russian cathedral complex near the Eiffel Tower in a spat over Syria with then president Francois Hollande, who had said Russia's bombing of Aleppo could amount to war crimes.

France had helped spearhead the EU's economic sanctions on Russia over the seizure of Crimea and backing for insurgents in the east of the former Soviet republic.

Macron has called for the “de-escalation” of the sanctions, which have seriously dented EU-Russia trade.

Moscow has much to gain from a rapprochement with Paris, said Thomas Gomart, head of the French international relations think tank IFRI.

“Russia realises that on the economic front it remains oriented towards the EU,” which relies on Russia for about a third of its gas supplies, with half of that amount transiting through Ukraine.

The venue will be the sumptuous palace of Versailles, where the pair will inaugurate an exhibition marking 300 years of Franco-Russian ties since the visit of Russia's modernising tsar Peter the Great to France in 1717.

“The idea is to stress… the duration and depth of the link between the two countries,” a Macron aide said.

Gomart noted that while the visit is early in Macron's presidency, it follows trips by the new leader to Berlin and the NATO summit in Brussels.

“It's a message that serves as a reminder that the French priority is Germany and the European project, while Moscow had banked on the disintegration of Europe,” Gomart said.

Russia's ambassador to France, Alexander Orlov, said Moscow had a “positive perception” of Macron, describing him as “very intelligent, realistic and pragmatic”.

“He's not very ideological compared with his predecessors,” Orlov told a meeting of business leaders last week. “With him we have more chances of moving forward than before.”

That would mean overcoming raw feelings over a raft of cyberattacks on Macron's election campaign that his aides have blamed on Russia, accusing the Kremlin of mounting a “smear campaign” against him.

On the eve of Putin's visit, central and eastern European activists plan a demonstration in Paris to denounce “the warlike behaviour of… Putin's Russia.”

Organisers of the Sunday march said Russia had a “strategy of general hostility towards Europe”.