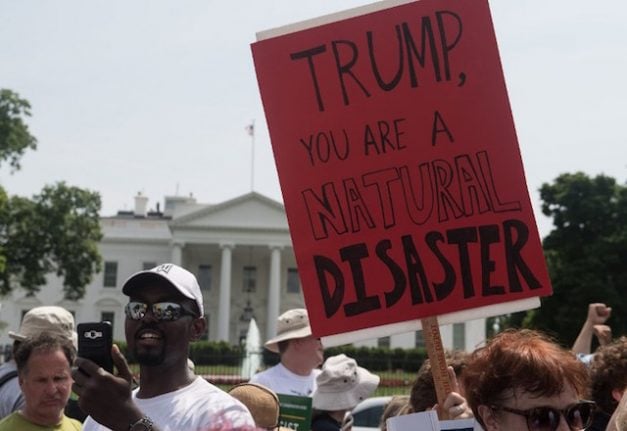 File photo showing protesters in front of the White House during the People's Climate March in Washington DC, April 29th. Credit: Nicholas Kamm/AFP
“My wish is that the United States takes no hurried decision,” Macron told a news briefing after talks with Trump, in which the two leaders discussed Washington's doubts over the 196-nation climate pact reached in late 2015.
“I told the US president the importance of the deal for us, the importance of the commitment made by the international community,” he said.
Trump has said he will decide on the landmark 2015 climate treaty — which he trashed as a candidate — upon returning from his international tour.
There are hints he may show his hand during Friday's G7 summit in Sicily, the last stop on his 10-day foreign foray.
READ ALSO: Paris deal 'irreversible', Hollande warns Trump
German Chancellor Angela Merkel, who will also be at the G7, is a firm backer of the Paris emissions-curbing accord, which was signed by Trump's predecessor Barack Obama.
“I am still trying to convince the doubters,” Merkel said on Tuesday, apparently alluding to Trump, who once described climate change as a “hoax” cooked up by China.