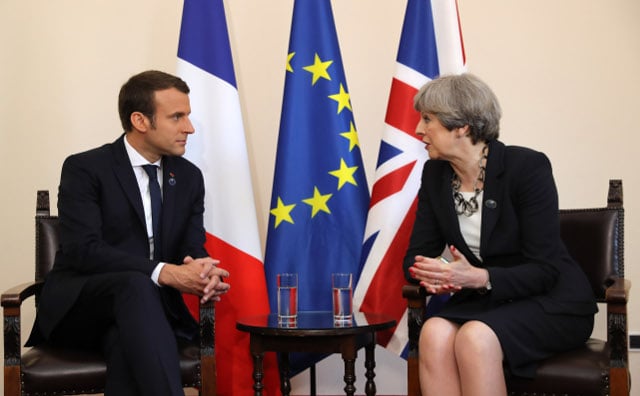 Photo: AFP
President Emmanuel Macron on Friday vowed France's total support for Britain's fight against terrorism after the Manchester attack as he met Prime Minister Theresa May at the G7 summit.
“We will be here to cooperate and do everything we can in order to increase this cooperation at the European level, in order to do more from a bilateral point of view against terrorism,” Macron told her, in their first formal meeting since he took office.
The bombing of a pop concert in Manchester on Monday night, which left 22 people dead, came a year and a half after another assault claimed by the Islamic State group at a rock show at the Bataclan in Paris.
Speaking to May in English, Macron said: “We know this kind of attack, we know how this can hurt the people of your country, but more generally for Europe, because they attack our young.”
Seated next to the French president in front of EU, UK and French flags, May said it was “one of our worst terrorist incidents that we've ever experienced”.
“Thank you for the solidarity you have shown to us since that event. But of course France itself knows what it is like to suffer from terrorist attacks,” she told him.
“And these incidents show us why it is so important for us to work together in defeating terrorism.”
May was due to lead a discussion on counter-terrorism with fellow G7 leaders on Friday — including US President Donald Trump — and call for them to put more pressure on internet companies to remove extremist content.
After Britain raised its national threat level to maximum after the attack, May announced she would no longer attend the second day of the summit in the Sicilian town of Taormina on Saturday, and instead fly home late Friday.
Macron and May first met in February in London. He was still only a presidential candidate, but was invited to Downing Street for talks, including on Britain's withdrawal from the EU.
Both leaders said Friday they would discuss defence, trade and economic issues, while Macron also made reference to the millions of Europeans living in Britain, whose fate after Brexit has yet to be decided.
There are “hundreds of thousands of people living in your country, in our country, and sharing our lives”, he said.