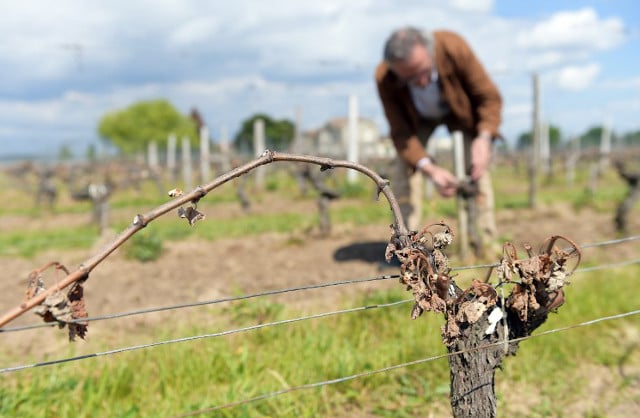 Photo: AFP
They set fires in thousands of oil drums, positioning them carefully between the rows of budding grapevines in southwest France. Giant fans were deployed to battle the cold, damp air settling on the plants.
Helicopters also flew low overhead, in another extravagant attempt to battle freezing condensation.
In the aftermath of the region's worst late-season freeze in more than two decades, winemakers here are looking forward nervously to the crucial June flowering phase, when pollination occurs.
Shrivelled vines
The freeze left a grim landscape.
“We have a hangover. Eighty percent of our vineyard was hit by the frost. It's all our work that has been wiped out,” says Jean-Francois Galhaud, president of the Saint-Emilion Wine Council that represents nearly 1,000 winegrowers, standing before rows of Merlot grapevines with curled and
shrivelled leaves.
The bitter cold struck twice within a week last month, ravaging the fragile shoots and buds that had emerged prematurely following mild temperatures in March.
This means poor harvests not only for grapes but also for fruit and vegetables like apples, pears and asparagus.
Wine producers say they have not experienced such a damaging frost since 1991 when over half of vineyards in the Bordeaux region were affected.
Francois Despagne, who produces the Saint-Emilion grand cru Chateau Grand Corbin-Despagne, says 90 percent of his vineyard was damaged by the cold, more than he has seen in 20 years in the business.
The weather-inflicted damage was felt throughout France and in other parts of Europe too.
In Germany, the frost reached all of the country's vineyards, which is “extremely rare”, says Ernst Buescher, of the German Wine Institute.
In Italy's Tuscany region, 20 percent of wine production was destroyed, valued at around $90 million (around 80 million euros), according to the agricultural association, Confagricoltura.
June's flowering vines
The quality of this year's grapes depends on the blooms in June, says Stephane Toutoundji, an oenologist based in the southwestern town of Libourne who advises winemakers throughout Bordeaux.
If the buds fail to resume growth between now and next month, the annual harvest will be halved in terms of volume for Bordeaux, costing an estimated 1.5 billion euros in sales, says CIVB, a wine industry association for the region.
One thing is certain, the harvest this year will be late.
“Let's cross our fingers that we do a 1961, a year with a small harvest that was of very good quality,” says Galhaud.
However Toutoundji says what has survived the freeze is only of “normal quality”.
Long-term damage?
To survive this bad patch, help is on hand for winegrowers in the form of partial unemployment benefits, aid for social charges and financial support from local authorities.
Only a small proportion, 15 percent, of France's 800,000 hectares (nearly two million acres) of vineyards are insured, mainly because of the high cost of insurance.
Last year's abundant harvest in the region will help fill in some of this year's gaps, thanks to a programme called VCI, whereby regulators allow winegrowers to keep approved amounts of wine stocks from a previous year in case of natural catastrophes.
But despite the VCI scheme, Bordeaux output is expected to come in at three million hectolitres this year, well below an average annual production of 5.4 million hectolitres.
The VCI allowances however do not help producers who sell their wine in bulk and do not have stocks to mitigate such shortages.
Adds to challenges
Bordeaux growers had been recovering with three good vintage years since suffering a poor year in 2013, making April's blow that much more difficult.
And despite the various near-term relief measures, the weather-inflicted damage lays bare other big challenges facing the winegrowers.
Producers in the south of France are frustrated with an increase of cheap Spanish bulk wine, which has sparked several demonstrations in supermarkets in recent months.
There is also competition from further afield.
Laetitia Ouspointour, of Chateau Vieux Mougnac in Lussac, worries the region will lose market share to countries like Australia and South Africa.
Rising production costs add to the challenge, she says.
“We will not be able to supply wine, and it will cost more than other wines,” Ouspointour says.
READ ALSO: Common wine blunders you should really avoid in France