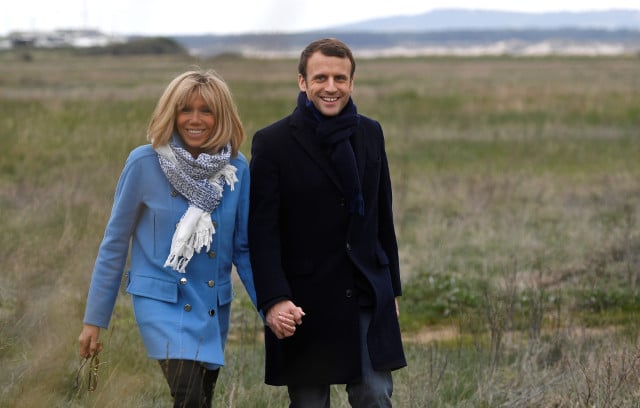 Photo: AFP
The lawyer of the newly-elected president and his spouse has sent a letter to the editors of Closer and Voici magazines which in effect threatens to sue if the publications are deemed to have invaded the couple’s privacy, according to L’Obs magazine.
The letter was reportedly sent the day after Macron made it through to the second round of the presidential election last month, and it made it clear that the couple and their extended families were off limits.
L’Obs noted the couple’s attitude towards Paris Match was the exactly the opposite, and that six pages had been devoted to them in its May 10 edition and a whopping 18 pages in the following week’s edition.
The photos showed the pair along with Macron’s parents and his brothers and sisters and nephews, and his wife’s three grown-up children and their spouses, and her grandchildren.
The photos were on both occasions shot by the Mimi Marchand photo agency under a deal struck with the Macrons.
Macron last week had his first major spat with the media since taking power, after his team imposed restrictions on which journalists could travel with him at the weekend on a trip to visit French troops stationed in west Africa.
The move, which echoed similar conflicts over media coverage of Donald Trump’s presidency in the US, sparked an angry joint response by more than 20 of the country’s top media outlets, including Le Monde newspaper, Agence France-Presse and state-owned broadcaster France 3.
READ ALSO: IN PICTURES: Emmanuel Macron's romance with France's new first lady Brigitte Trogneux