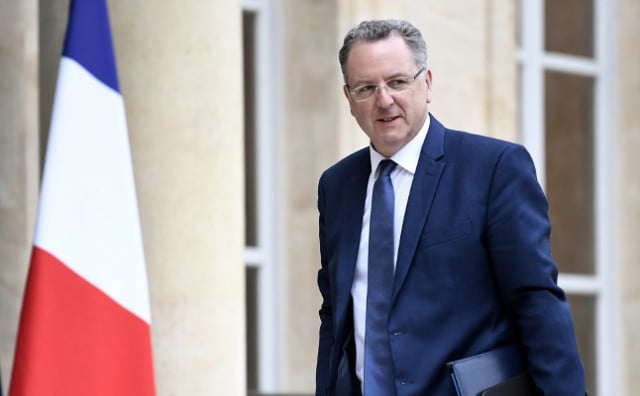 Photo: AFP
Richard Ferrand, general secretary of Macron's La République En Marche! party and minister for territorial cohesion, found himself the subject of a story published in satirical French paper Le Canard Enchaîné on Wednesday.
The newspaper — the same one responsible for exposing the scandal that possibly ruined François Fillion's shot at the presidency — reported that that Ferrand used his position as director of a health insurance company, Mutuelles de Bretagne, to benefit his family.
Naturally the French press have picked up the story and run with it, while pointing out that so far there is no proof that anything illegal was done.
What happened?
The reports say that in January 2011, during his time in post at the non-profit Mutuelles de Bretagne, the company was looking to rent a commercial space in Brest in Brittany, north western France, for a health centre.
Mutuelles de Bretagne unanimously settled on property management company Saca, headed up by Ferrand's lawyer wife Sandrine Doucen, with the company set to receive €42,000 annual rent for the deal.
But the problem was the company did not yet legally exist. So once the agreement was in place Doucen got to work registering the company.
Saca did not end up buying the premises for the health centre until July the same year.
While the practice is not illegal, for some it may call into the question the ethics of the president's closest advisor.
What does Ferrand say?
When Le Canard Enchaîné approached him for comment, Ferrand did not deny the facts but said it was not a special arrangement.
It was the cheapest solution,” he said. “The cost was consistent with the market and nothing was hidden. Everyone knew that the company belonged to my wife.”