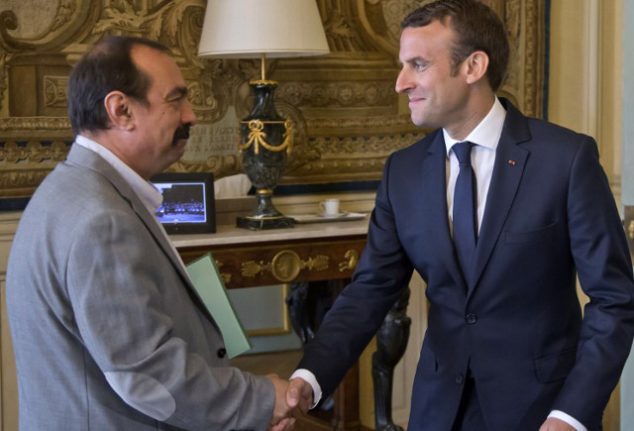 Photo: AFP
The centrist former Socialist economy minister has signalled his intention to move quickly to free up businesses by cutting red tape in an attempt to generate much-needed jobs and growth.
Giving himself a September deadline, Macron says he will use executive orders to sidestep parliament.
Efforts at labour reforms under Socialist president Francois Hollande led to massive street protests last year, many of which turned violent, resulting in the watering down of several measures.
The reforms caused a deep rift within the Socialist Party, leaving the government to bypass parliament to ram through the law.
Morning meetings between Macron, 39, and the leaders of the three main unions, CFDT, CGT and Force Ouvriere were to be followed by a meeting with Pierre Gattaz, head of the main employers' federation Medef.
While employers' representatives have hailed the plans, unions are wary.
“Job market reform is the major subject in France today,” Gattaz said. “Let's do it in all transparency, with consultation, but quickly.”
For his part, Laurent Berger, head of the most reform-minded union, the CFDT, warned that a “hasty reform of the labour code would be counter-productive (and) if Emmanuel Macron wants to ram it through, it won't work.”
His counterpart at the more hardline CGT, Philippe Martinez, also took issue with haste while noting that the timeline coincides with summer holidays for millions of French workers.
“It's a bit much to debate such an essential law while workers are on holiday,” Martinez said.
Unions fear new inroads into hard-won workers' rights, though Macron has yet to spell out the new measures.
On the campaign trail, Macron pledged to overhaul complex labour regulations and reduce the weight of the French state in the economy in order to free up business activity.
Bosses would be allowed to negotiate working conditions directly with their employees rather than being required to honour industry-wide agreements.
Critics say the shift would lead to “social dumping” between companies. Macron, who was elected on May 7, also wants to impose a ceiling on severance pay to workers, a measure virulently opposed by unions.
Prevent obstruction
On Tuesday, the president's office said Macron would not divulge the “precise content of the reform” because Prime Minister Edouard Philippe and Labour Minister Muriel Penicaud will continue the meetings on Wednesday.
“His social agenda and his convictions were largely voiced during the campaign. The French and the unions know what it's about,” the president's office said in a statement.
Philippe said the meetings would conclude on Monday. Government spokesman Christophe Castaner warned on French television: “All obstruction must be prevented. You don't have the right to impede France when you don't agree with such and such a measure, especially when it was at the heart of Emmanuel Macron's presidential agenda.”
Macron was Hollande's economy minister for two years before quitting the government last summer to launch his presidential bid as an independent centrist.
Prime Minister Philippe is from the rightwing Republicans party, while Labour Minister Penicaud is the former head of Business France, the agency in charge of promoting France abroad.
READ ALSO: Are you an English speaker in France? Here are some job options you may not have considered