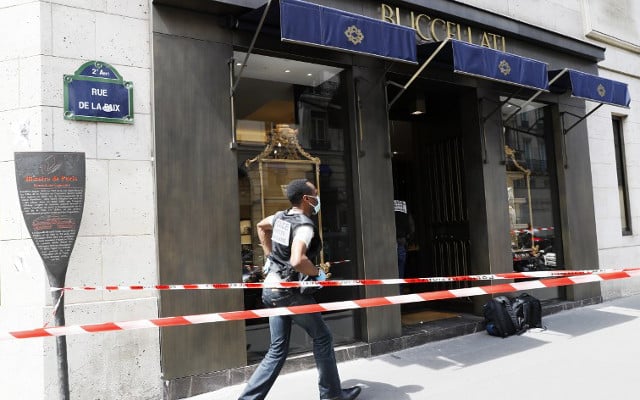 Photo: AFP
Jewellery thieves have struck again on the ultra-chic rue de la Paix in Paris, bursting into a store armed with axes and a handgun and making off with around five million euros worth of loot.
The dramatic “smash and grab” heist happened at lunchtime on Tuesday when one of the robbers, posing as a customer, arrived at the door of the Buccellati high-end jewellery shop.
When a security guard buzzed open the door to let him in, his two accomplices, who had been hiding out of sight, rushed in behind, Le Parisien reported.
One was wearing a balaclava, the other a carnival mask. The robbers ordered staff and customers to keep back as they smashed open the display cases with their axes and stuffed their contents into bags.
They then escaped in a car they had equipped with a siren, Le Parisien said.
The robbery was the latest in a series to hit stores on or near the rue de la Paix, which runs from Opéra to the Place Vendome where both the fabled Ritz Hotel and France’s Ministry of Justice are located.
Last October, Swiss watchmaker Girard Perregaux was held up in mid-afternoon by thieves who made off with half a million euros worth of goods.
A Chopard jewellery store on Place Vendome was hit in March last year by robbers armed with a pistol and a grenade who took a haul worth six million euros.
Tuesday’s hold-up of the Buccellati jewellery shop came just a day after two masked and armed men burst into a private apartment in the posh 16th arrondissement of Paris and stole a ring worth an estimated three million euros.
The owner of the apartment, her two young sons and a friend of the family were all in the apartment when the thieves burst in. Police said they were shaken but unharmed.
READ ALSO: Here's where you're most likely to get robbed in France