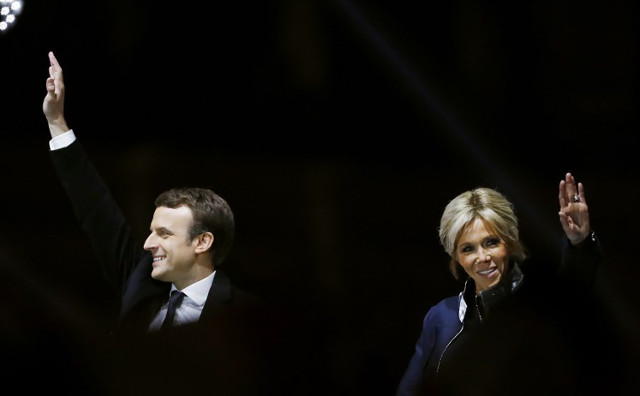 Photo: AFP
“They have a lot in common, they are both gerontophiles!” Eric Brunet said on a show on TV channel C8 on which he was appearing as a guest. The term “gerontophile” means someone who has a sexual preference for the elderly.
It was the latest in a long series of commentary and debate – much of it of questionable taste – about the youthful president and his much older spouse Brigitte.
The comment by Brunet, who works for BFMTV, was not well received by the other guests, with French author, director and humorist Laurent Baffie dismissing the joke as “extremely unkind and not funny”.
At the end of the programme, Brunet apologised for the joke which was already putting him at the centre of a Twitter backlash.
This is just the latest in a string of abuse that Macron, 39, and Brigitte Macron, 64, have experienced since being in the public eye, with their 24-year age gap providing seemingly endless fodder for the French and foreign press alike.
Unsurprisingly, satirical magazine Charlie Hebdo is among those exploiting the age gap.
The magazine was recently slammed when it published a cartoon on its front page showing a heavily pregnant Brigitte with the president's hand touching her stomach alongside the words, “He's going to make miracles happen”.
People immediately took to Twitter en masse to denounce the cartoon as sexist and misogynist.
In the foreign press, the nature of the relationship between the president and first lady has verged on obsession.
Before Macron had won the presidency, Britain's Times newspaper wrote “A cougar at the Elysee?” while German newspaper the Bild mass circulation daily was in shock: “She's 24 years older! How can such a marriage work?”
READ ALSO: France's 'first lady': Does Brigitte Macron want to be the French Michelle Obama?