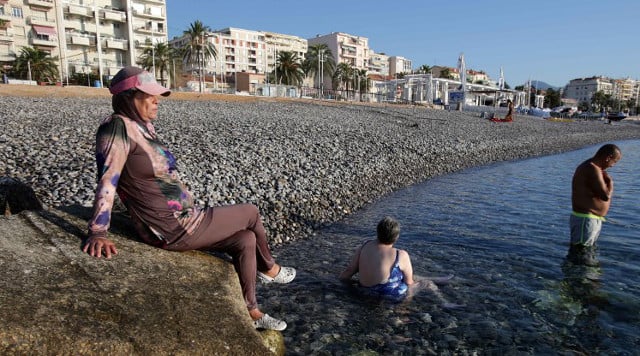 Photo: AFP
French-Algerian businessman Rachid Nekkaz, who led a campaign against a ban on burkinis on French Riviera beaches last summer, is calling on women to descend en masse – wearing the full-body swimwear – on the beach on Friday as the town’s film festival draws to a close.
“The Cannes Film Festival is all about liberty and tolerance,” he told The Local. “It‘s the perfect place to celebrate this ‘newfound freedom” in the city that was the first to ban the burkini.”
He himself will take part in Friday’s event, accompanying a dozen women in burkinis in the colour of the French tricolour flag – red, white and blue – as they stroll down the famed Croisette promenade and then on to the beach.
“The event will last about two hours – the time it takes to watch a film,” said Nekkaz.
Last summer Nekkaz, a controversial figure in France, offered to pay the fines of any women caught breaching the burkini ban that was brought in in a score of towns run by right-wing mayors.
The mayors said the garment, which is favoured by some Muslim women as it allows them to dress modestly while going for a swim, was an affront to France’s staunchly secular values as it allegedly manifests adherence to a religion.
The move sparked a heated national debate, with critics saying the bans were an Islamophobic measure and a breach of women’s right to wear what they like.
The bans were overturned late last August by France’s highest administrative, which ruled that they were a violation of fundamental liberties.
But Nekkaz, who describes himself as a defender of human rights, said the burkini is still an important issue in France and that the freedom to wear it needs to be protected.
Far-right leader Marine Le Pen and conservative politician Nadine Morano were staunch supporters of the burkini ban, and the wealthy Algerian entrepreneur has cheekily used their burkini-clad faces on publicity to advertise Friday’s burkini party.
Nekkaz was at the forefront of a campaign against a 2010 law banning Islamic full-face veils and claims to have paid around €250,000 in fines on behalf of women who received the €150 fine after defying the legislation. That campaign earned him the nickname of “Zorro of the niqab.”
He describes himself as a “secular Muslim,” and says that personally he does not like to see women wearing full-face veils or burkinis but that attempts to ban them is an infringement of the civil liberties.
By Rory Mulholland