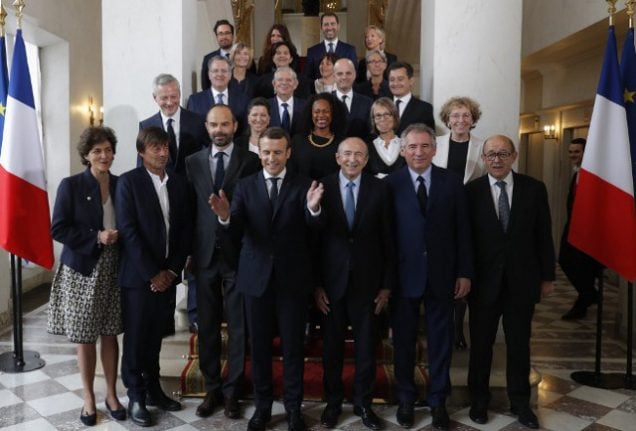 A survey from the Harris Interactive group showed that 32 percent of people planned to vote for Macron's Republique en Marche (REM) in the first round of parliamentary elections on June 11.

That was a three-point gain from the week before and a six-point gain from 10 days ago, with the rightwing Republicans and far-right National Front down slightly over the last week at 19 percent.

Macron faces a crucial four weeks having named his first 22-member cross-party government which held its inaugural meeting on Thursday morning at the presidential palace.

Led by rightwing Prime Minister Edouard Philippe, it includes a mix of Socialist, centrist and Republicans figures as well as newcomers including Olympic fencing champion Laura Flessel (see photo below) and a star environmentalist Nicolas Hulot. Half are women.

Philippe told France Inter radio on Thursday that the cabinet had been chosen to last and was “in line with the political renewal that we are in the process of putting in place.” Another survey published Thursday by the Elabe polling group showed that 61 percent of French people approved of the new faces, many of whom were taking their first steps into public life.

French newspapers saw the choice of Philippe as prime minister and the handing of important economic portfolios to rightwingers Bruno Le Maire and Gerald Darmanin as a clear indication of Macron's priorities.

“Macron on the move to the centre-right,” headlined right-leaning newspaper Le Figaro, while left-leaning Liberation headlined its coverage of the cabinet line-up “Mostly of the right.”

Having been an advisor and economy minister under his predecessor as president, Socialist Francois Hollande, Macron was accused by his critics of being too left-wing during the vicious election campaign. (President Emmanuel Macron and his 11 women ministers and secretary of states. AFP)

France's youngest ever president, who defeated far-right leader Marine Le Pen on May 7, is hoping to sink the traditional parties in June's parliamentary elections by building a new centrist force.

His aim is to win a majority with REM and its allies which would enable him to push through his ambitious plans to overhaul labour regulations, social security, schools and pensions.

Socialist party chief Jean-Christophe Cambadelis said that Macron's government “of the right and for the right” would “imperil protections for workers, drastically reduce the number of civil servants and smash public services.” Macron will be helped by a gradually improving economy.

The unemployment rate hit its lowest level since 2012 in the first quarter of the year at 9.6 percent, official data showed on Thursday. This is still double the rate of Germany or Britain.

Many analysts still remain sceptical about Macron's ability to win a parliamentary majority with REM candidates, but on the campaign trail he always stressed that voters would be “coherent”.

Having elected him president, they would then give him a majority to govern, he predicted.

The polling data does not forecast the number of seats REM and its allies would win in the 577-seat National Assembly, which is difficult to predict because of France's two-round voting system.

Any candidate who wins more than 12.5 percent of registered voters in the first round goes through to a decisive second round on June 18.

REM confirmed its final list of parliamentary candidates on Thursday, half of whom have never before held elected office in line with Macron's pledge to bring fresh faces into politics.

Only 28 of them are sitting MPs.