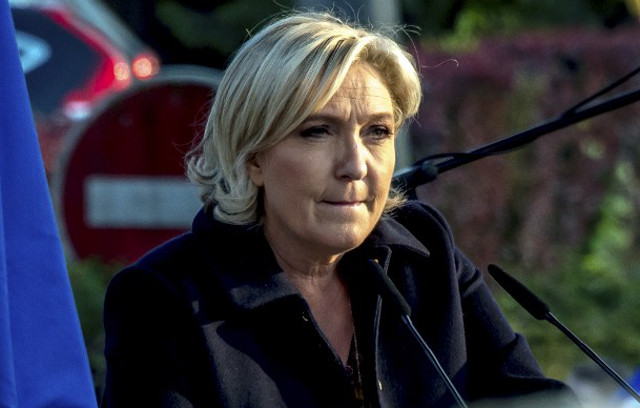 Le Pen may have scored her party's biggest election success by gaining 34 percent of the vote in the second round of the presidential election and with it some 10.6 million votes but all is not well with the far right National Front party.

Le Pen wanted to take the momentum of her party's biggest ever share of the electorate into June's parliamentary elections vowing to become France's “main opposition force”.

But the wheels have come off the juggernaut in recent days as the fallout from Le Pen's long election campaign opens splits on the far right.

There are reasons why there is talk of a “crisis” and an “implosion” within the party and why things may not get better anytime soon. By the time Marine Le Pen faced Emmanuel Macron in the live TV debate on May 3rd, some in the National Front party were already criticizing her campaign for focusing too much on the EU and not enough on core issues such as immigration and identity.

Many also saw her first round score of 21 percent as a huge disappointment given that she had been polling at 28 percent earlier tin the campaign.

But Le Pen's performance during the live TV debate drew stern criticism not only from the press and from her opponents, but also from National Front's officials and supporters.

Jean-Pierre Legrand, the National Front's mayor of Roubaix, declared he wouldn't want to see the party's leader win the election, saying she showed she “didn't have the stature to be president”.

“It is a shame because I think it was the only opportunity for Marine Le Pen to be elected president. We can now be sure that there will be an internal crisis and tensions within the National Front,” said the mayor. Shortly after the second round defeat came the shock decision of Le Pen's niece Marion Marechal Le Pen, a powerful figure to the right of the party, to quit politics and not run for a second term as an MP.

Marechal Le Pen announced she was stepping out of politics “for now” to pursue a career in the private sector.

Her grandfather Jean-Marine Le Pen, the former head of the party, called the move a “desertion”.

There are suggestions her decision was motivated by strategy, perhaps wanting to step away from the action with the party threatening to turn on itself.

There has been speculation she will now bide her time and return to the fold perhaps as part of a new right wing party. The tiring presidential campaign and it's brutal, raucous end, culminating in Le Pen's disastrous TV debate performance has taken its toll on the National Front's leader.

Le Pen is due to stand in the parliamentary elections in the town of Henin-Beaumont, northern France, but there are now suggestions she may pull out.

Apart from being mentally and physically exhausted Le Pen is worried what another election defeat would do to her standing in the party.

By Wednesday she had still not confirmed she would be running for Henin-Beaumont. Another problem Le Pen faces in the future is allegations she used funds for EU parliamentary assistants to pay staff members for party work in France.

Le Pen was summoned by French magistrates to answer questions over the allegations but she refused to go, invoking her EU parliamentary immunity.

French prosecutors have asked the EU parliament to lift Le Pen's immunity and at some point she will have to face the magistrates. She could face a damaging trial and even worse a conviction if prosecutors prove the allegations are true.

Party split over the euro Many believe one of the mistakes of the National Front's presidential election campaign was Le Pen's promise to scrap the euro and bring back the franc, which scared voters who valued their savings more than they hated the single currency.

Some National Front big wigs have recognised the error and have since decided to scrap what became a policy shrouded in confusion.

One of Marine Le Pen's top aides Gilbert Collard (right in above photo) declared after the election that for his party, “the question of [scrapping] the euro was over”.

However another Le Pen ally, the party deputy Florian Philippot (left in above photo) threatened to leave the party if Le Pen dropped the issue.

“I'm not here to keep a job at every cost and defend the opposite of my profound conviction,” he told RMC radio.

There is trouble ahead. Philippot, who is not popular among more traditional members of the party not least its founder Jean-Marie Le Pen caused anger and confusion within the party this week by setting up a new organisation called “The Patriots”.

Many in the National Front, including Marine Le Pen's partner Louis Aliot questioned why a new association was needed and their reaction undermined a growing split between party vice president Philippot and the traditional wing.

Philippot said the new association was “to defend and carry the message” that Marine Le Pen gave on the evening of the second round of the presidential election.

And it was Le Pen's message that threatens to be the real divisive issue as the party moves forward.

National Front to change its name? After accepting defeat to Emmanuel Macron, Marine Le Pen told sympathizers: “I suggest we begin a profound transformation of our movement to create a new political force,” she said, adding: “I call on all patriots to join us.”

The name of Philippot's organisation suggests his association has been set up to look how the party can remodel itself and even change its name from the National Front, which will be a hugely controversial move.

But Philippot is in favour, knowing the party is still tainted by its anti-Semitic, racist roots.

Speaking after Le Pen's election defeat he said: “The National Front is going to evolve, it's going to use this rallying energy.”

The party, he said, “is going to transform itself in a new political force which, by definition, will no longer have the same name.”

But if Philippot and Le Pen push ahead with their plan, and Le Pen's own father Jean Marie (left in above photo) has already said he is against it, then it may just split the party. Perhaps that is their intention.

“Changing the party's name can attract more people, but it will not be enough. The party needs more normalization and a big clean out.” Normally after gaining 10.6 million votes in the presidential election an “outsiders” party like the National Front should look forward to the parliamentary elections with the hope of gaining a large number of seats.

But for the National Front, which only has two MPs currently, the parliamentary elections are a much harder challenge.

According to party official Jean-François Bloc, the National Front is not used to openness, its officials are not sufficiently trained nor do they have the required experience.

“There are young people who want to start a political career and have chosen the National Front, but when it comes to selection we don't know what kind of skills the party values.

“Mistakes in the choice of candidates are very visible”, Marchand-Lagier told The Local.

The National Front finds it difficult to win seats due to other parties tactically voting in the second round to block their candidates. There is no suggestion why that will change this time around.

If the National Front fail to make it into double figures for MPs in the next parliament, then it will feel like yet another decisive defeat for the party and prompt yet more soul searching and recriminations.

It may turn out that 2017 was the last year of the National Front as we know it.