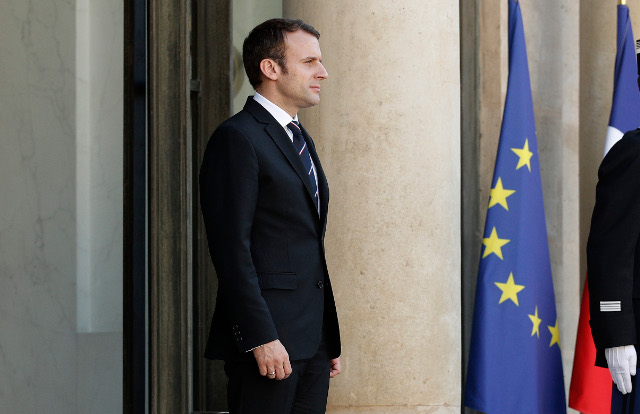 Macron named his government on Wednesday which featured figures from the right, the left, the centre, a famous ecologist and an Olympic fencing champion.

The government contains 18 ministers and four secretaries of state with the gender divide split evenly.

Macron and his Prime Minister Philippe Edouard named Bruno Le Maire from the right-wing Republicans party as the minister for economy.

Le Maire had been touted as possible member of the cabinet in recent days and is one of three members of the Republicans party in Macron’s government along with Prime Minister Philippe.

Another figure from the right adopted into Macron’s 22-strong government is Gerald Darmanin, who is named as minister of public accounts.

The naming of two conservatives naturally irked those on the right.

François Baroin who is leading the Republicans’ parliamentary elections campaign said: “They have gone, it’s their choice, it belongs to them.”

The Republicans later sent out a statement calling the government “confusing”. The party also confirmed that those members who had joined Macron’s Republic en Marche (REM) party are no longer part of the Republicans.

Socialist party stalwart and veteran of François Hollande’s government Jean-Yves Le Drian remains in the government but moves over from defence minister to Minister for Europe and Foreign Affairs.

Renowned ecologist and former TV star Nicolas Hulot has been named Minister of Ecology. Hulot has been touted as a minister in every government over recent years so it is somewhat of a coup for Macron to persuade him to join his cabinet.

He is the most famous face MAcron has brought in from civic society, which was one of his pledges.

Macron’s long term ally Gerard Collomb, the mayor of Lyon, is named interior minister and centrist François Bayrou, who joined forces with Macron at a crucial point in the campaign was named minister for justice.

New French government ideologically balanced between left and right; half of cabinet are women. https://t.co/PLNUn19JAT

Goulard has been praised for her experience of the EU institutions and helped organise Macron’s trip to Berlin to meet Chancellor Angela Merkel during the election campaign.

Other women named as part of the government include Agnès Busain as minister for solidarity and health, Muriel Penicaud as minister of labour and Françoise Nyseen, a publisher, as culture minister.

Annick Girardin, another surviving member of Hollande’s government, has been named minister of overseas territories and former Olympic fencing champion Laura Flessel from Guadaloupe is another member of civic society drafted into the government. She becomes the minister of sport.

READ ALSO: Who’s who: All you need to know about Macron’s new government Prime Minister Edouard Philippe tweeted out “Government named. Now let’s get to work.” The government’s first cabinet meeting will be held on Thursday.

On the campaign trail ahead of his election on May 7, Macron pledged a slimmed-down group of ministers of around 15 people, half of them women and including people from outside politics.

Macron had delayed announcing the names on Tuesday with the official reason given that it was due to the need to carry out more extensive screening of candidates. However many suggested it may have been because of disagreements with his PM Edouard Philippe.

Macron, a 39-year-old centrist, is seeking to attract support from the right-wing Republicans party and appointed a prime minister from their ranks, Edouard Philippe, on Monday.

READ ALSO: Why is Macron naming government now and not after June’s elections? France’s youngest ever president has already attracted dozens of Socialist MPs to his side as he seeks to create a new centrist force in French politics that will marginalise the traditional parties of left and right.

He is eyeing parliamentary elections in June when he hopes his new Republique En Marche (REM) party will win a majority, giving him the freedom to enact his ambitious reform programme.

In his busy first week, Macron is also set to meet EU Council President Donald Tusk in Paris on Wednesday as he tackles his top foreign priority of reforming the European Union.

The meeting was pushed back at the last-minute from its scheduled time of midday until the evening.

Tusk was one of the first prominent European voices to congratulate Macron on his May 7 presidential election runoff victory over far-right and anti-EU politician Marine Le Pen.

Macron, who ran a staunchly pro-European campaign, kept with tradition by visiting German Chancellor Angela Merkel on Monday in his first trip abroad after taking office.

The pair now at the centre of the European project vowed to give it new impetus, saying they were ready to change treaties if necessary.

Macron has urged a deepening of the EU to fight off a recent surge of populism on the continent.