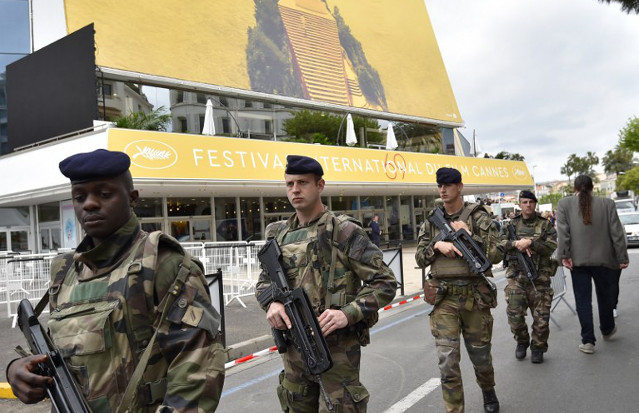 The gathering on the southern French coast, where 19 films will be vying for the coveted Palme d'Or top prize and hundreds more will be screened, also comes with a higher security status than in previous years.

Ten months after a truck attack in nearby Nice killed 86 people, concrete barriers — in the form of giant flower pots — have been set up to try to block any similar assault. Snipers have been positioned above sensitive sites for what is the world's biggest film festival.

Patrick Mairesse, a top regional security official, said the objective was to be as “invisible as possible, to cause as little nuisance as possible — so the party can stay a party.”

But unprecedented numbers of police and soldiers have been deployed and a French warship lies at anchor off the beach.

Airport-style security gates and bag searches are also in operation at the festival, which attracts tens of thousands of curious tourists as well as the Hollywood elite.

France remains under a state of emergency following the November 2015 terror attacks in Paris, one of several jihadist assaults that have claimed 239 lives nationwide in the past two years.

Despite the tough measures, glamour reigns on the palm-fringed Croisette promenade along the glittering Mediterranean coast.

Hardcore fans started setting up stepladders outside the Palais des Festivals venue a full 24 hours early, hoping for selfies as their favourite stars head down the red carpet.

This year's Cannes programme points to changes shaking up the film industry, including the march on Hollywood by streaming giants Netflix and Amazon and the arrival of virtual reality.

A row over Netflix, which has hailed Cannes' acceptance of two of its movies as proof of its new status as a major industry player, dominated the run-up to the festival.

The US platform has refused to screen the two movies in French cinemas due to strict rules that mean films cannot be streamed from subscription services in France until three years after their traditional box office release.

A backlash from French cinema chains prompted Cannes organisers to change the festival's rules from next year onwards to insist on a theatrical release — a move that could effectively ban Netflix from taking part in the future.

The website — which has 100 million subscribers — hit back by saying the industry must embrace change, with CEO Reed Hastings blaming the French cinema establishment for “closing ranks” against it.

Netflix's movie “Okja” about a mysterious giant beast, starring Tilda Swinton and Jake Gyllenhaal, is nonetheless among the most talked-about at Cannes, with Sofia Coppola's American Civil War thriller “The Beguiled” featuring Colin Farrell alongside Kidman.

The Australian actress is the undisputed queen of this year's Cannes, starring in three movies as well as TV series “Top of the Lake”, which is getting a special screening.

Others in the running for top honours include “Happy End”, a film set against the European migrant crisis by “Amour” director Michael Haneke, who is seeking a record-breaking third Palme d'Or.

Another highlight will be Mexican director Alejandro Gonzalez Inarritu showcasing a virtual reality project that allows the viewer to walk in the footsteps of refugees.