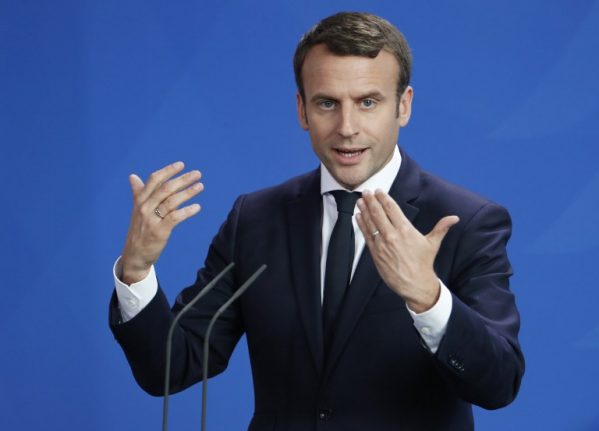 The Elysée Palace released a statement on Tuesday afternoon announcing the delay saying it was to allow France's High Authority for Transparency of Public Life (HATVP) to carry out the necessary background checks on ministers.

At least that was the official reason. Many speculated that Macron and his Prime Minister Edouard Philippe were disagreeign over the names of potential ministers or just needed more time to complete what is a delicate balancing act.

Macron, a centrist, has promised to include faces from the left and right as well as political newcomers.

But according to the Elysée the HATVP will carry out an audit of each minister's tax records to make sure there are no skeletons hidden in the closet or more to the point secret bank accounts hidden in Switzerland, as was the case with former budget minister Jerome Cahuzac.

The body will also check there are no conflicts of interest that could compromise the ministers.

Macron has taken on the fight to clean up politics and does not want to risk being tainted by any scandal with June's crucial parliamentary elections just weeks away.

“These procedures are carried out in compliance with the law, in particular with regard to tax secrecy,” read a statement from the Elysée Palace on Tuesday.

“An in-depth procedure will be conducted on the tax position and declarations of interest of the members of the government after their appointment.”

Members of the government will also be forced to sign an “integrity” pledge that they are not engaged in illegal activities.

Ministers “will undertake to exercise their governmental functions in an irreproachable way,” read the statement.

On Monday, his first day in office, Macron named centre-right MP Edouard Philippe as prime minister and travelled to Berlin for talks with German Chancellor Angela Merkel on reforming the EU.

On Tuesday, he and Philippe were finalising a government which Macron says will supersede France's entrenched left-right divide and breathe new life into the country's jaded political landscape. Macron has said half his ministers will be women and that some will be high achievers in business, academia, the civil service or the NGO world.

Some could be replaced after next month's parliamentary election, depending on how many seats Macron's fledgling Republique En Marche (REM) party wins.

So far his appointments to his presidential team have all gone to men under 50, most of them graduates like him of France's elite ENA college for senior public servants — which has turned out generations of French politicians.

His choice of Philippe, 46, for prime minister was seen as a strategic pick by the 39-year-old president, who is trying to woo modernisers of all stripes to his side.

A former minister in the outgoing Socialist government, Macron has already convinced dozens of Socialist MPs to run on his general election ticket.

But he also needs to win over a part of the right to deliver on his promise of a cross-party approach and weaken his opponents ahead of the two-round June 11-18 parliamentary vote.

Philippe — a moderate member of the Republicans party whose presidential candidate crashed out in the election's first round — is seen as Macron's Trojan horse on the right.

While some in the Republicans fumed at Philippe's appointment, seeing it as a betrayal on his part, others welcomed it and urged the parties to accept Macron's “outstretched hand”.

“A whole section of the centre and the right is ready to cross the line,” the conservative Le Figaro daily wrote Tuesday.

Le Drian is expected to be the only member of the outgoing Socialist government to be kept on, with Macron keeping a careful distance from the little-loved administration of his predecessor Francois Hollande.

Among the non-politicians to be offered roles is well-known environmentalist Nicolas Hulot, a source in the presidency said.

Hulot, who has previously turned down such offers, had “decided to go for it”, provided certain conditions were met, the source said.