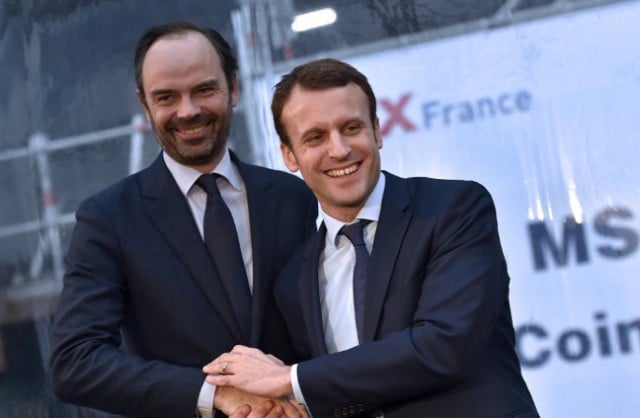 He’s from the right

First and foremost Macron’s decision to appoint right-wing MP Edouard Philippe is motivated by his desire and need to show he is a real centrist who can unite elements of the left and right and overcome the old party divides.

And this isn't just for the sake of it, but with June's crucial parliamentary elections in mind, in which Macron will need a majority to enable him to put in place his reforms.

While Macron has found it fairly easy to win backing among his old Socialist party colleagues, or at least those in the centre of the party, he has struggled to win over figures in the centre of Les Republicans party, who have so far remained loyal to their political group.

By appointing Philippe, Macron will hope that in the coming days he may persuade other figures from the Republicans party to join his République en Marche party and stand as MPs in June’s election.

By strengthening his own party Macron knows the move weakens the Republicans, who have high hopes of winning a majority in the parliamentary elections, which would force Macron into working with a right wing government.

“If the prime minister comes from the right, Emmanuel Macron will be able to attack the parliamentary elections by dynamiting the right, in the same way he has done to the left,” political expert Philippe Moreau-Chevrolet told AFP.

Philippe has been a close ally of the centre right Alain Juppé, who like Macron was considered a progressive, but lost the Republicans party nomination to the more conservative François Fillon last November.

While Macron may have won over many of Juppé's voters who did not want to back Fillon in the election, he has struggled to convince any of the Mayor of Bordeaux's close allies to join his movement.

Philippe's nomination could change all that.

But it's not just about winning over figures on the right, Macron knows he needs to win voters too for the crucial parliamentary elections. With Philippe on board centre-right voters may be persuaded to back Macron rather than their traditional choice of the Republicans party.

Macron's number one criteria for his PM was someone who can buy into his mission to break down the old political divide between the left and the right.

Philippe used to be a member of the Socialist Party and worked for former Prime Minister Michel Rocard before switching to the right by joining Alain Juppé's new UMP party.

He has already shown therefore he can cross the divide and has loyalty to ideas rather than a party.

He is young but not too young

At 46, Philippe is just seven years older than Macron and so would help the new president fulfill his promise to rejuvenate French politics.

Philippe has just served one term as an MP so is still a fresh face while at least having experience of the National Assembly.

Some suggest Macron would have been wiser appointing a more experienced elder statesman alongside him, but that’s not really the style of a president who has shown already that he likes to gamble and prove doubters wrong.

Philippe is an unknown face but has experience

Again some observers suggest Macron would have been better appointing a familiar face in French politics for such a key post and someone who is more familiar with politics on a national level.

Philippe has been mayor of Le Havre since 2010 and an MP for the area since 2012 but lacks experience and clout at a national level. But Macron himself has shown how an outsider can quickly become a recognizable face.

By appointing the fairly discreet Philippe, the new president knows he will still be the main man.

Macron hasn’t become president just to hand power over to a prime minister. He wants to be in charge and by appointing an unknown quantity Macron knows Philippe’s career now depends on his own chances of success.

Of course Macron’s chances of getting his prime minister to follow his lead depend on them being compatible.

The pair have similar backgrounds for a start. They both studied at Sciences-Po university as well as at the Ecole National d’Administration (ENA), the prestigious grande école where many of France’s future leaders are trained.

The two first met at a dinner in 2011 and have remained in contact ever since.

Last year Philippe told journalists that “Macron thinks 90 percent the same way as me” and while he hasn’t always been complementary about Macron the mayor of Le Havre has said many positive things about him.

“I like him because he is a nice and intelligent person,” said Philippe in September last year and he has admitted then when he listens to Macron’s speeches he agrees with most of what he says.

But obviously policy matters more than personality and Phillippe, like Macron, is in favour of the liberal economic policies the new president wants to pursue and shares his views on many social issues.

Macron has also vowed to clean up French politics after the scandals that have besmirched the country's leaders in recent years, notably François Fillon's fake jobs scandal.

Philippe quit Fillon's campaign once the Republican candidate refused to step down after being charged, despite having promised to do so.

He also revealed to the public how he had been fined for speeding on a French motorway, saying that “French people rightly demand their elected leader to be exemplary.”

READ ALSO: Five reasons why Macron is not your typical French president

All of the above criteria suit Macron's project but he still needed a man who is able to lead the new government of a new party.

Philippe is highly respected, not least by his mentor Alain Juppé.

“Edouard Philippe is a man of great talent,” said Alain Juppé after hearing the announcement.

He is known for being a good speaker and for being able to hold his own when coming under fire from rivals.

Juppé reportedly told him in the past that he just needed to bide his time and he would be prime minister one day. Juppé probably thought that would be under him as president and not the maverick Emmanuel Macron.