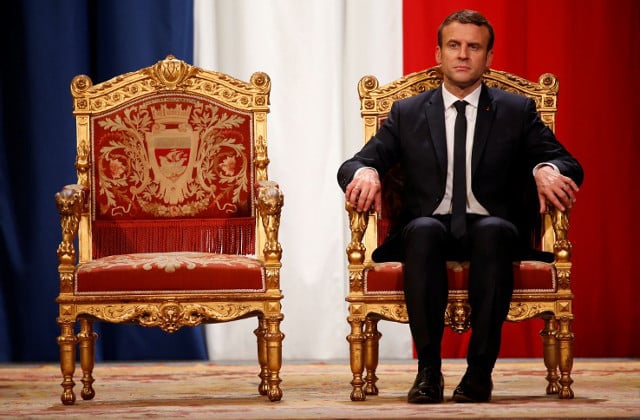 The 39-year-old centrist leader laid out his ambitious plans for France as he took power on Sunday, promising to restore France's shattered self-confidence and help rebuild the flagging European Union.

His choice of prime minister will be crucial for the first task, with the 46-year-old centre-right Edouard Philippe from the Republicans party seen as the favourite for the job.

Picking him would send a clear signal that Macron hopes to attract other young modernisers from the Republicans to his new centrist party, Republic on the Move (REM), which will contest parliamentary elections in June.

“If the prime minister comes from the right, Emmanuel Macron will be able to attack the parliamentary elections by dynamiting the right, in the same way he has done to the left,” political expert Philippe Moreau-Chevrolet told AFP.

Macron, who was economy minister under outgoing Socialist president Francois Hollande, has already attracted dozens of centre-left MPs to his movement as he reshapes French political life.

Without his own parliamentary majority, the former investment banker will find it hard to push through his planned reforms of the labour market, pensions, unemployment benefits and education.

“I will not reverse course on any of the commitments taken in front of the French people,” Macron said on Sunday as he took power from Hollande, his former mentor, adding that “France is strong only if she is prosperous”.

Philippe is the mayor of the gritty northern port of Le Havre and an MP for the region since 2012 who studied at the same universities as Macron and shares many of his views on the economy and social issues.

Later on Monday afternoon, Macron will travel to Berlin to meet Chancellor Angela Merkel, maintaining a French presidential tradition of making the first European trip to the other half of the EU's power couple.

The fervently pro-European Macron wants to push for deeper ties in the 28-member EU to help the bloc overcome the imminent departure of Britain which voted to leave last year.

France's place is in the European Union “which protects us and enables us to project our values in the world”, Macron said on Sunday, but the club needed to be “reformed and relaunched”.

He intends to press for the creation of a parliament and budget for the eurozone which would see Germany, the zone's richest member, contribute funds to support economic growth in weaker nations.

Olivier Ihl, an academic from the Grenoble Institute of Political Studies, said that the visit was “an important moment because he wants to relaunch Franco-German cooperation in a Europe that is on its knees”.

Merkel welcomed Macron's victory over Le Pen, saying he carried “the hopes of millions of French people and also many in Germany and across Europe”.