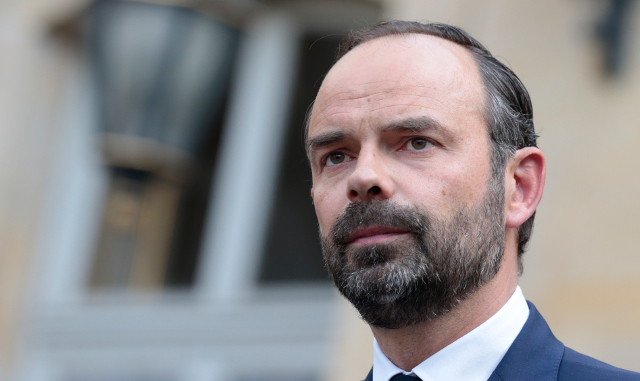 Macron put an end to fevered speculation in recent weeks by announcing Edouard Philippe the centre-right mayor of the gritty northern port town of Le Havre, will lead his government.

The 46-year-old from the Republicans party had become the favourite for the job in recent days because he was seen as a perfect fit for Macron's efforts to unite forces from the centre-left and centre-right to his new centrist progressive Republique en Marche movement.

His relative youth – just seven years older than Macron himself  – plus his recent experience as an MP and a mayor were also attributes that made him attractive to Macron who has vowed to rejuvenate French politics.

His name was finally confirmed in a brief announcement at the Elysée Palace at around 3pm French time, despite everyone expecting the name of Macron's PM to be given early in the morning.

Philippe officially took over from former Bernard Cazeneuve at 4.30pm (see pic below).

During his short speech in which he paid tribute to Cazeneuve's work as a minister and PM he reminded his predecessor that he was “a man of the right”.

Philippe is close to former French PM Alain Juppé, who had hoped to be French president himself before losign in last yearr's Republicans primary to François Fillon.

Reacting to the news of Philippe's announcement Juppé described him as “a man of great talent”. Macron's choice of right wing Prime Minister had been seen as crucial in his quest to win a majority in the June's parliamentary elections that would allow him to put into action his planned reforms of the labour market, pensions, unemployment benefits and education..

Philippe studied at the same universities as Macron and shares many of his views on the economy and social issues.

Picking him sends a clear signal that Macron hopes to attract other young moderates from the Republicans to his new centrist party, Republic on the Move (REM), which will contest parliamentary elections in June.

For their part the Republicans reacted to the news by insisting Philippe's decision to join Macron's government represented “a personal choice and was not a coalition.”

“Congratulations to Edouard Philippe for his nomination as PM. Passing the old divides to serve France and the French people,” tweeted Le Maire. The new prime minister now has to name a government before Wednesday's first cabinet meeting.

There has been speculation about what kind of role the new prime minister will have with many speculating that the chosen person would simply be tasked with pushing through Macron’s own plans.

But the new president himself has said previously that he wants the prime minister and his other ministers to have greater responsibility than in recent years which has seen French presidents “directing everything”.

He suggested he wants a return to the past where the Prime Minister has a more important role in governing.

“The president presides, he does not govern,” said Macron in recent interview.

Macron, who was economy minister under outgoing Socialist president Francois Hollande, has already attracted dozens of centre-left MPs to his movement as he reshapes French political life. The 39-year-old centrist leader laid out his ambitious plans for France as he took power on Sunday, promising to restore France's shattered self-confidence and help rebuild the flagging European Union.

“I will not reverse course on any of the commitments taken in front of the French people,” Macron said on Sunday as he took power from Hollande, his former mentor, adding that “France is strong only if she is prosperous”.

The new president travelled to Berlin on Monday to hold talks with German Chancellor Angela Merkel, maintaining a French presidential tradition of making the first European trip to the other half of the EU's power couple.

In Berlin on Monday, the fervently pro-Europe Macron will push for deeper ties in the 28-member EU to help the bloc overcome the imminent departure of Britain.

France's place is in the European Union “which protects us and enables us to project our values in the world”, Macron said on Sunday, but the club needed to be “reformed and relaunched”.

He intends to press for the creation of a parliament and budget for the eurozone which would see Germany, the zone's richest member, contribute funds to support economic growth in weaker nations.

Olivier Ihl, an academic from the Grenoble Institute of Political Studies, said the visit was “an important moment because he wants to relaunch Franco-German cooperation in a Europe that is on its knees”.