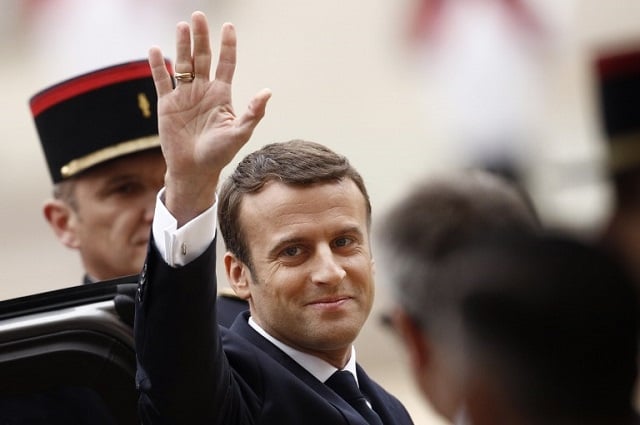 Here are quotes from his inauguration speech:

“The time has come for France to meet the challenges of our time. The divisions and fractures that run through our society must be overcome, whether they be economic, social, political or moral.”

The first of two priorities is “to give back to the French people the confidence that has been flagging for too long.”

“I can assure you I didn't think for a single second that (the confidence) was restored as if by magic on the evening of May 7th (the night of his election victory). It will be slow, demanding but essential work.”

“I will convince our compatriots that France's power is not in decline, but that we are at the dawn of an extraordinary renaissance because we have all the qualities which will make, and do make, the great powers of the 21st century.”

On Europe and the world

“The world and Europe need France now more than ever and they need a strong France with a sense of its own destiny.”

“We need Europe and it will be reformed and relaunched because it protects us and allows us to project our values in the world.”

“The world needs what French men and women have always taught it: the audacity of freedom, the demand for equality and the desire for fraternity.”

General Charles de Gaulle “restored France's place among the nations of the world”.

Francois Mitterrand “managed to reconcile the French dream and the European dream”.

Jacques Chirac “showed we are a country able to say no to those rushing to war”.

Nicolas Sarkozy “spared none of his energy to resolve the financial crisis which hit the world so violently”.

François Hollande helped bring about the Paris climate warming agreement “and protected the French people in a world hit by terrorism”.