There’s been no doubting François Hollande’s unpopularity in France.

Opinion polls have been telling us for years now that he is the least appreciated French president ever – at one point his approval ratings dropped to four percent.

He lacked charisma and earned a reputation for being wishy-washy, but his main problem was that the French left never forgave him for his switch to more liberal economic, pro-business policies before the dissent turned to outright rebellion on the streets over his labour reforms.

Meanwhile the rest of France saw him as the embodiment of his country’s social and economic paralysis accusing him of half-baked economic reforms that didn't go far enough. Hollande failed to keep his many pledges to bring down unemployment. France has half a million more people out of work now than in 2012.

But despite his many travails, which featured getting caught cheating on his former partner, and a damaging tell all book in which he was caught insulting footballers and magistrates, it’s important to remember the the positive impact of François Hollande's time in power.

One of his crowning achievements was to succeed in passing France’s biggest social reform in a generation when he shepherded France's gay marriage bill through parliament in 2013 despite mass protests.

It was one of his campaign promises that he managed to keep. Britain, Ireland and the US all followed suit.

Hollande had pledged to cut the president's salary by 30 percent and those of his ministers and it happened once he took office. A decree from May 2012 cut down government ministers' monthly pay from €14,200 to €9,940 and the French Parliament voted the reduction of the president's income from €21,300 to €14,910.

He also imposed other belt-tightening restrictions on his own Elysée palace, notably by flogging one tenth of the presidential wine collection, much to the dismay of Oenophiles. The budget for the Elysée palace had ballooned under Sarkozy and Hollande managed to bring it under control. In December 2015 when the world descended on Paris of the United Nationas Climate Change conference (COP 21) in what was seen as the last chance to save the planet Hollande made it his personal mission to make sure a deal was clinched between the 195 countries.

And he succeeded although many argue the impact will be limited especially if countries roll back on the deal.

Gérard Davet, who co-authored the naming book on Hollande “un president ne devrait pas dire ca” believes the crisis and conflict between Ukraine and Russian backed backed separatists in the east would have been far worse if it wasn't for Hollande's tireless efforts alongside Angela Merkel to maintain peace between the sides.

He also commended Hollande for his role in making sure a deal was found that effectively kept Greece in the eurozone.

Handling a string of terror attacks Hollande was regularly commended for the dignified way he handled the unprecedented number of devastating terror attacks that hit France during his presidency.

He preached unity, resilience and calm at a time when many feared communities in France could turn on each other, analysts and politicians talked of the threat of civil war and the rising far right demanded a more draconian response.

In one of the defining moments of his presidency, he led world leaders and one million Parisians in a march against terrorism after the January 2015 attack on Charlie Hebdo magazine and a Jewish store.

READ ALSO: IN PICTURES – The defining moments of Hollande's presidency He sacrificed himself in bid to cut unemployment

Hollande's quest to cut unemployment – that had been rising when he took over in 2012 – ultimately failed but some suggest France should be grateful for his shift to pro-business policies, despite his pre-election promises to end austerity and make finance his enemy.

Giving companies €40 billion of tax breaks, funded by €50 billion of public spending cuts and reforming labour laws to free up the jobs market was not what his left wing voters had in mind when they elected him.

“He acted in the general interest of France, but he’ll need to wait before people thank him for it,” French political scientist Bruno Cautres, from the Cevipof research institute told The Local previously.

“He sacrificed himself because of the economic situation and the public deficit,” he added.

At the end of Hollande's term he and his successor Emmanuel Macron will note that the unemployment has generally started to fall and the economy is showing signs of growth.

Figures released in March revealed a total of 187,200 jobs were created in the non-farm private sector in 2016, the highest annual figure since 2007 before the global financial crisis slammed the world economy.

“In the future Hollande will probably be seen as someone who did more or less what was needed for France at that time,” French economist Xavier Timbeau told The Local.

Thousands of more teachers in schools

One of Hollande’s standout promises was to boost the beleaguered teaching profession by 60,000 professeurs, which by and large he achieved. He also brought back teacher training schools.

It was after the Paris terror attacks in 2015 that Hollande decided to take the fight to terror group Isis in Syria and Iraq.

While French planes were already bombing targets in Iraq Hollande helped forge an international coalition including Britain and the US to strike against Isis in its Syria strongholds.

Hollande was also credited for making a decisive intervention to block the advance of jihadists and rebels in Mali.

After Hollande's former budget minister Jerome Cahuzac was caught with a secret bank account in Switzerland Hollande introduced a law forcing all minister to declare their wealth publicly.

Under Hollande France also introduced a laws to protect whistleblowers and to crack down on tax fraud that led to the thousands of tax evaders owning up and paying back tens of millions to the tax man.

He wasn't involved in any corruption scandal…

…which for a French president is pretty impressive, especially given his predecessor Jacques Chirac was convicted of corruption and Nicolas Sarkozy was charged several times over different cases.

Patrice Lhomme, whose damning book about Hollande (Un president ne devrait pas dire ca) was seen as the nail in the coffin to his chances of running for a second term said: “For the first time in the Fifth Republic we had a president who was decent an honest who was not involved in any corruption scandal or linked to one in some way. And we must give him credit for that.”

His popularity will rise now he has left

Cevipof's Bruno Cautres believes Hollande will benefit from the same hindsight that sees former president Jacques Chirac fondly remembered in France, despite a conviction for corruption.

“Unpopular presidents become far more popular when out of office,” he says.

“In a few years people will look back and commend him for what he did,” Cautres says. 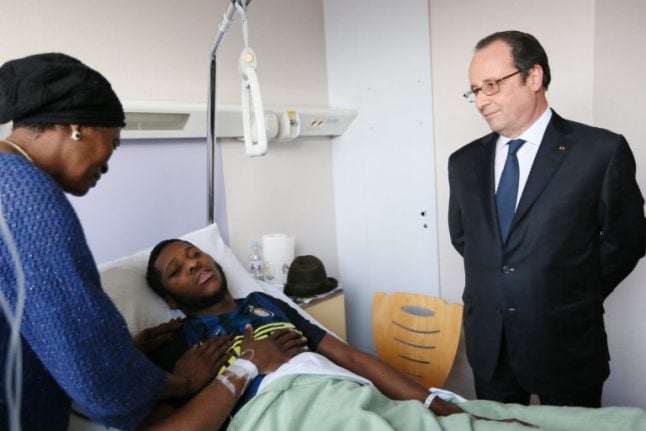