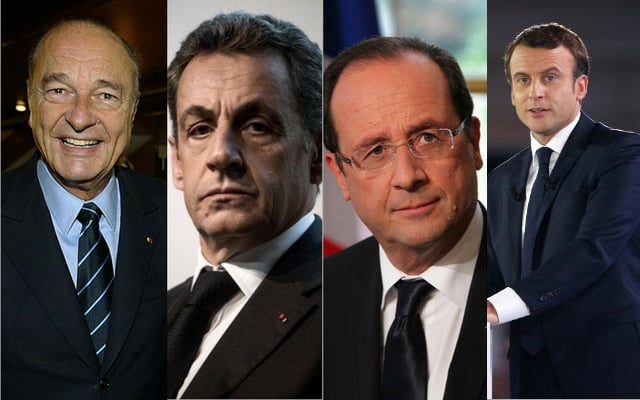 Emmanuel Macron will be a president apart from his predecessors. Here's why.

At 39 years old, Macron will not only become one of the youngest leaders in the world, but also the youngest president of the entire history of the French Republic.

Only France’s first President, Napoleon’s nephew, Louis-Napoleon Bonaparte, was anywhere near Macron’s age when he reached power at the age of 40.

As for more recent presidents, Macron is many years younger than Francois Hollande, who came to power at the age of 58, and Nicolas Sarkozy who was elected at 52. The youngest French president in the last half a century, Valéry Giscard d'Estaing, was 48 when he won the 1974 election.

Macron’s youth became the main target for his opponents throughout the election campaigns. His competitor, Marine Le Pen, is nearly ten years his senior and has played on this by calling him a “baby Hollande” and comparing him to her son having a tantrum.

But what mattered was that voters were looking for someone young and fresh and they found it in the form of Macron. Forget the traditional ideas of left and right, Emmanuel Macron decided to go straight down the middle with his party En Marche!, which he only launched in April last year.

His aim, he said when launching the party, was to win over a majority of French people to “new ideas for the country” that could be implemented in the future.

Claiming to be of “neither the left nor the right”, Macron and his party reject the politics of the major parties that have ruled over France for the last decades. Breaking away from many before him, and putting an end to France’s previous habit of alternating from left to right at each election, his policies show elements of both sides of the political spectrum.

For example, on the one hand he wants to encourage competition between businesses. But on the other hand, he wants to “fight against inequalities and protect France's most vulnerable”.

So Macron may not be completely wrong says he would “change the face of politics.”

He also promises to change the face of the French parliament by fighting for every seat available. At least half of his candidates to be MPs will be from civic society he says.

While he is unlikely to get a majority the France's National Assembly will have a new look after the June elections. The 25-year difference in age between Macron and his wife also sets him apart from France’s previous presidents whose previous relationships with younger women have turned heads in France and abroad.

Macron's wife Brigitte Trogneux, once his drama teacher, has prompted huge interest among the international press, no doubt because of their unusual story and that age gap.

Macron's predecessor François Hollande is currently believed to be in a relationship with actress Julie Gayet, 18 years his junior.

The president before him Nicolas Sarkozy, hooked up with singer, model and actress Carla Bruni who is 13 years younger than him.

And previous French president François Mitterand famously had a secret mistress Anne Pingeot, who was only 20 when she got together with the 47-year-old head of state.

Will Macron do something else out of the ordinary for French presidents and not get caught having an affair? 4. He plans to introduce France's first official First Lady
There's never been an official First Lady of France, but Macron seems to like the idea of getting his wife involved if he wins on Sunday.
“If I'm elected – no, sorry, when we are elected – she will be there, with a role and place,” Macron told supporters in April before adding that she won't be paid with public money.
What exactly does this mean? Only time will tell.
IN PICTURES: Macron's romance with Brigitte Trogneux Macron also stands out from the crowd for his fluency in English. To Le Pen’s horror, Macron spoke in English to make a lengthy speech about the future of the EU in January.

But few French politicians have a good grasp of the language. Many of them, including Le Pen, also liken speaking in English to treason and hatred towards France.

Hollande was mocked in 2012 when he wrote to US President Barack Obama to congratulate him on his re-election and signed off with the words, “Friendly, Francois Hollande.”

It was an embarrassing mistranslation of the French word “amicalement”, used at the end of letters to mean “best wishes.”

In 2006, then French president Jacques Chirac famously stormed out of an EU summit in protest at a French businessman who had addressed the room in English.

Here's Macron giving an interview in English with the BBC.