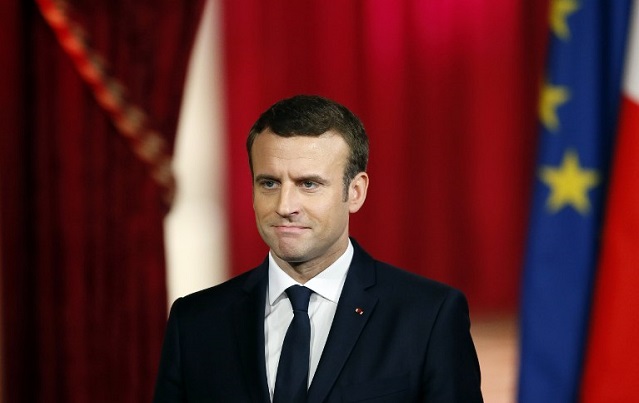 But the 39-year-old centrist faces daunting challenges to rejuvenate the economy and breathe new life into the beleaguered EU.

Macron, who was an unknown before being made economy minister in 2014, took over from President Francois Hollande, the Socialist whose five years in power were plagued by stubborn unemployment and bloody terror attacks.

After being officially signed in as the new president, Macron gave a solemn speech in which he vowed to “give French people their confidence back”. “For decades France has doubted itself and doubted what it has done,” said Macron.

“My mandate will be guided by two demands: give the French their self-confidence back. I never thought for one second it can be done by magic. It's a difficult task.”

Macaron said the “division and fractures” in France must be overcome

France had chosen “hope”, said Macron, and the “spirit of conquest” as he vowed to “reform and relaunch” the European Union.

He told the invited guests and dignitaries that he would start work from Sunday night.

Under light rain, he was driven through the streets of Paris to the 18th-century palace that will become his home as the eighth president under France's current republic, which was founded in 1958.

Macron's wife, his 64-year-old former school teacher Brigitte who has rarely been away from side throughout the campaign, arrived separately and walked up the red carpet into the Elysee wearing a pale blue outfit. The red carpet outside the Elysee Palace. Photo: AFP

After ascending the red carpet at the Elysee Palace in central Paris, Macron was greeted by his former boss Hollande. The pair held an hour-long private meeting away from the cameras in the president's office where Macron was given the codes to launch France's nuclear weapons.

By the time Macron descended to escort Hollande towards his car, the clouds had cleared and there were blue skies above the Elysée.

Hollande was applauded by supporters and Macron as he headed towards his vehicle for his final journey through the gates of the Elysée Palace. The former president, whom opinion polls showed was the most unpopular ever, waved to staff and his predecessor as he left for the Socialist party headquarters.

The former president is clearly delighted at the election of Macron, who scored a clear victory over far-right candidate Marine Le Pen on May 7th.

Hollande launched Macron's political career, plucking him from the world of investment banking to be an advisor and then his economy minister.

“I am not handing over power to a political opponent, it's far simpler,” Hollande said on Thursday. Security was tight with around 1,500 police officers deployed near the presidential palace and the nearby Champs Elysees avenue and surrounding roads blocked off.

Macron was then to head up the Champs Elysée to the Tomb of the Unknown Soldier underneath the Arc de Triomphe.

At the end of the ceremony, a 21-gun salute rang out from the Invalides military hospital on the other side of the River Seine. After a formal lunch, Macron will visit Paris's town hall, a traditional stop for any new French president in his “host” city.