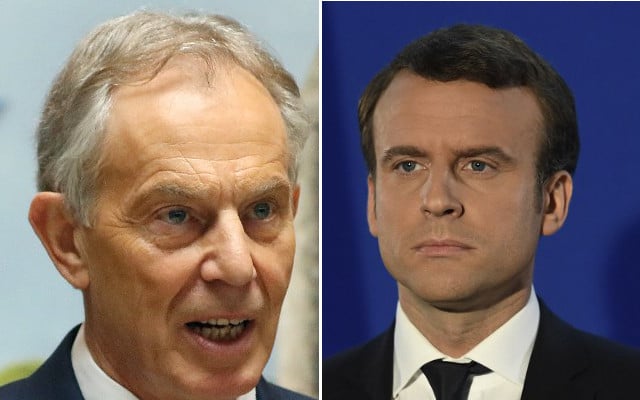 Photo: AFP
Ex-British Labour prime minister, Tony Blair has sent a message to France's new president Emmanuel Macron, in an editorial for in Le Monde newspaper.
The editorial was titled: “I was in a situation similar to that of Emmanuel Macron, here are the lessons I learned.”
Blair had some kind words for Macron's achievements in defying the odds to become president ahead of candidates from traditional parties.
“The achievement is incredible. Emmanuel Macron founded a movement and took leadership of one of the world’s major powers in little more than a year,” writes  the former UK prime minister.
“He did this on a platform which has remarkable ideological clarity: moving beyond old paradigms of left and right and pitting himself against the new populism sweeping Western politics.”
Blair also spelled out the challenges the new president faces and how he can overcome them.
It's important to begin with the changes that will have the most impact. Do the things which really matter. Make sure the policy will truly deliver the result,” writes Blair.
“I found that the most difficult part of leading was translating reforms into reality,” he writes.
Blair advises Macron to “Create specialist structures tasked with putting the reforms into action, with teams trained to do just that.”
Blair also covered the problems caused by globalisation.
“As I have said for a long time, the only way to move away from the people's feelings of unhappiness or resentment is to present real solutions to the problems posed by globalisation,” Blair said.
Going on to discuss the benefits of globalisation including the rapid decrease in world poverty, Blair also mentioned the cultural and economic stresses felt by many western nations, to which he attributed feelings of fear and resentment.
“Populists use this anger and exploit issues such as immigration to create scapegoats,” he said.
Blair praises Macron for understanding that the solution is not to treat the population's legitimate concerns with scorn but to present solutions that will improve the country's future,.
He went on to stress the importance of defending values against extremists who use religion as an instrument for hate without confusing radical Islam with Islam.
READ ALSO: Analysis: The six big challenges facing France's new president Emmanuel Macron