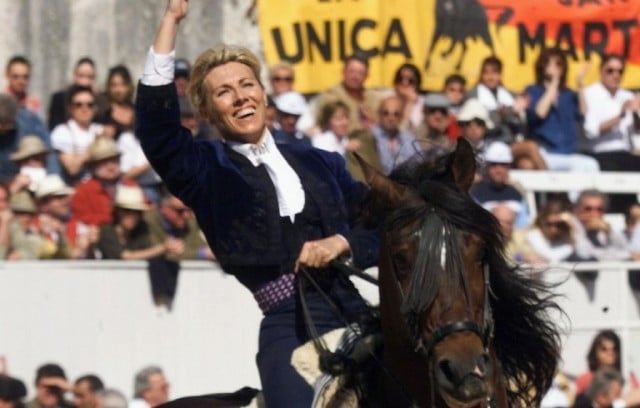 Marie Sara, a former bullfighter hopes to be an MP for Macron's party.
Marie Sara, retired bullfighter
The 52-year-old retired blonde star of horseback bullfighting will take on far-right National Front lawmaker Gilbert Collard in what promises to be an exciting battle in the southern Gard constituency.
The Gard includes Nimes, one of the main bullfighting centres in France. The glamorous Sara, who is divorced from tennis ace Henri Leconte, raises corrida bulls.
“I am used to entering the arena, he's a good adversary. I'm running to prevent him being re-elected,” she told AFP. A file image of Sara, from 1999. Photo: AFP
Marion Buchet, fighter pilot
Buchet, 35, was tapped to run in the eastern Meurthe-et-Moselle constituency. A fighter pilot for the past 15 years, she went back to university last year to study law at the Sorbonne.
Cedric Villani, mathematician
Villani, 43, won the Fields medal — the equivalent of the Nobel Prize in mathematics — in 2010. A dandy with long hair and a collection of floppy bow ties, he will stand in a suburban Paris district.
Villani signed a scientists' petition during the presidential run-off calling on the French to back Macron against far-right leader Marine Le Pen.
Another candidate is man born in Rwanda who was adopted in France at the age of four and will contest a seat in Brittany.

Around 19,000 people had applied to candidates with Macron's movement, 71 percent men and 29 percent women, Republique en Marche revealed on Thursday.

The National Investiture Commission carried out hundreds of interviews with applicants, who had to meet several key requirements including having no criminal record or having been disqualified from standing for an elected position.

The candidates were also chosen for their values, which had to closely reflect those of the movement and political pluralism was also a selection critieria.

Some 93 percent of those who are fresh to politics are in jobs, while two percent are job seekers, four percent are retired and 1 percent are students.

The youngest candidate is 24-years-old and the oldest is 72, whilst the average age is 46.