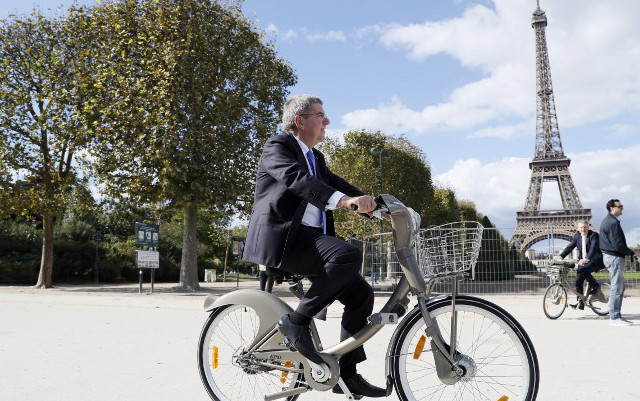 All photos: AFP
The famed Velib' bike-sharing scheme is set to move from JCDecaux to the Smoovengo consortium led by Montpellier-based bike-sharing company Smoove.
Here are some important changes set for 2018 that every Velib'er should know:
1. The price will (very likely) go up
As predicted by Le Parisien newspaper earlier this year, the price of using the Vélib' is very likely to rise. However, the tariffs will not be confirmed until the autumn when a price hike is voted on.
The basic subscription of €29 with the first 30 minutes of each journey free “doesn't reflect reality,” president of Vélib' Métropole Marie-Pierre de la Gontrie, told the paper. She also confirmed that the increased tariffs would be moderate to avoid losing the 300,000 current subscription holders who will be automatically enrolled in the new scheme.
While the Vélib scheme was not originally supposed to cost the public a penny, the auditors found that in 2013, the total bill came to €16 million. Paris City Hall has since confirmed that it forks out around €15 million a year, according to reports in the French media.
In the past, current operator JCDecaux was accused of not being transparent when it came to its financial reports. 2. They'll be more modern
CEO of Smoove, Laurent Mercat has been keen to highlight the technology that will be available when his company takes over.
With 30 percent of the new fleet electrically-operated and offering Wifi, the scheme which is fast-approaching its tenth birthday is set to make a step into the future.
The move will also help battle the common problem of bike stations in Montmartre, Montparnasse and Buttes Chaumont remaining empty for long periods of time as users use them to cycle downhill but rarely use them to slog up Parisian hills.
3. It will be easier to get to the suburbs
Currently 20 suburbs around Paris take part in the Vélib' scheme and 40 more will have the chance to join in time for the start of the 2018 contract. Other suburbs around Paris will be able to join the scheme later during the company's 2018-2032 contract for a participation fee of €10,000 per station.
Temporary bike stations will also be set up for certain large-scale events such as music festivals Rock-en-Seine and Solidays. 4. A bike you can depend on
By updating the bikes Smoove plans to reduce vandalism to affect only 15 percent, a figure which falls in line with the company's current fleet of 20,000 bikes, reported Le Parisien.
This falls well below the current vandalism figures which see above 70 percent of bikes damaged each year.
The new bikes will have a locking cable integrated into the handle bar and a GPS-tracking system to prevent damage.
Theft and vandalism have been a major scourge on the scheme since its launch in 2007. Around 19,000 are stolen each year and while the majority are found, around a quarter of those recovered are so badly damaged they have to be destroyed.
JCDecaux has claimed that €1.5 million of the total of the €15 million amount the Vélib' system costs Parisians each year is made up of vandalism repair. And happily something that won't change…
5. A smooth handover
During the handover, the Vélib' bikes will be available although the number on hand will decrease.
Between January and March 2018 the two companies will execute a “well orchestrated” plan, Smoove CEO Mercat assured Le Parisien, as JCDecaux removes its 1,200 stations. Smoove will have 50 percent of its stations operational by January 2018.
READ ALSO: You better Velib' it: Cost of renting Paris city bikes could jump in future