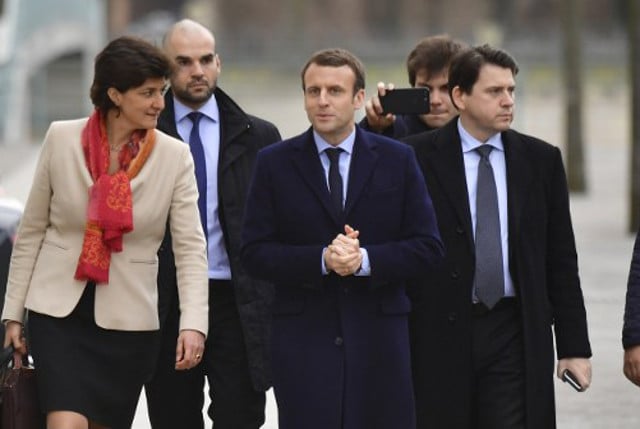 Photo: AFP
The presidential election left France's traditional parties on the sidelines, with the conservative Republicans and ruling Socialists eliminated in the first round, and Macron facing far-right leader Marine Le Pen in last week's run off.
Macron has said half of the candidates for his year-old Republique en Marche (Republic on the Move) for the 577 seats up for grabs in June 11-18 elections will be newcomers, meaning a diverse range of figures from business, civil service, local activism and academia are set to make their first foray into politics.
The 39-year-old has also promised that half of candidates in winnable seats will be women.
“The second act in the redrawing of our political life will be the building of a parliamentary majority in the elections in June,” secretary general of the movement, Richard Ferrand, told reporters on Monday.
So far the names of only 14 candidates are known, but on Thursday afternoon “around 450” will be revealed, Jean-Paul Delevoye of Republic on the Move said.
The party has received and filtered through some 15,000 applications submitted online since 19 January, a representative of the movement said.
Many of his newcomers, which have been approved by a nomination committee, will be up against seasoned politicians with long careers and local networks of activists and supporters.
The president-elect is left-leaning — a one-time Socialist party member — and was a senior advisor to Hollande and an economy minister in his government 2014-2016.
No-one who planned to stand for the rightwing Republicans party has defected, party secretary general Bernard Accoyer said on Thursday despite efforts to recruit them.
This week former prime minister Manuel Valls shocked his Socialist party by saying it was “dead” and announcing he wanted to be a candidate under Macron's banner.
But an official said Wednesday that Valls had not yet fulfilled the criteria to be a candidate.
The Republicans party, whose candidate Francois Fillon crashed out in the first round of the presidential election after being charged over giving his wife allegedly “fake” jobs on the public payroll, is also aiming to become the majority party in parliament.
That would force Macron, who will be inaugurated on Sunday, to share power with them in what is known as a “cohabitation” in France.
A poll showed that only 52 percent of voters want a pro-Macron government to emerge from the elections, while 42 percent favoured a legislature that would be a check on the new leader.
Optimism seemed muted too, with 55 percent of respondents to the Elabe survey saying they thought Macron would “not improve things for the French people”.
SEE ALSO: Who's the big secret Emmanuel Macron has been hiding?