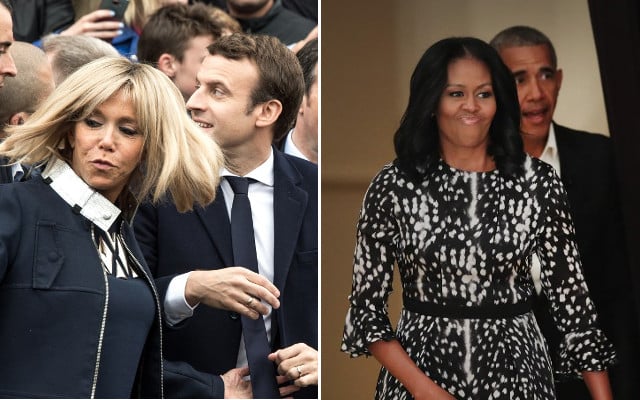 Photo: AFP
“It's necessary that the person who lives with you has a role,” said Emmanuel Macron in the run up to his election win.
“I hope that a role can be defined and I will ask for some work to be done on this,” said the France's new president.
Macron was talking about his wife Brigitte – who has been ever-present at his side – and the official status or role he intends her to have as France's premiere dame.
The title “first lady” is used in France more and more but in reality the role of 'premier dame' does not currently exist in the French constitution and there is no legal status for it.
Macron however has been open about wanting to change that. A French Michelle?
That would suggest Brigitte Macron's function could become more like that of a First Lady in the United States, where Donald Trump's wife Melania has her own office, a budget and a team of 12 people, including a chief of staff.
This has led to suggestions Mrs Macron could model herself on a certain popular former American president's wife.
“Michelle Obama is a good reference for Brigitte Macron,” French author and journalist Alix Bouilhaguet, who wrote a book on the presidential candidates' partners, told The Local.
“She plays a full and meaningful role next to Emmanuel Macron and she wants to be a real Premier Dame,”  the author added.
During her time in the White House Michelle Obama engaged in personal campaigns on issues such as equality and obesity.
“Brigitte Macron has causes that are important to her, notably education because she is a former teacher, disabilities and autism that she could take on, but also culture and issues involving the role of women” said the Bouilhaguet.
Macron was the only presidential candidate to talk openly about his wish for the first lady role to become official, partly because he was the only candidate, who allowed his partner to take a roll in the limelight during the campaign, rather than remain discreet.
'How much would she cost to tax payers?'
But there are certain obstacles in his path. Experts believe he won't have to change the constitution but he may have to introduce a law.
And although he has already made it clear she would not be paid a salary, he does want the first lady to have a transparent and clear budget for the function, which hasn't necessarily been the case in the past.
Previously any expenses the president's wife has built up have been paid out of the general budget for the Elysée but after the scandal involving François Fillon and his wife Penelope's role as his assistant, the French public demand transparency more than ever.

And while for the moment the influence held by previous partners of presidents has been unofficial, both Carla Bruni-Sarkozy and Valerie Trierweiler – ex-partner to François Hollande enjoyed the luxury of an office at the Elysée Palace.

Trierweiler also had a staff of five people and the total cost to tax payers was around €19,000 a month, which was the source of regular criticism.

Trierweiler had begun to grow into her role as first lady after a rocky start – “you don't become first lady overnight,” she had said – but was then unceremoniously dumped by François Hollande after it emerged he was having an affair with actress Julie Gayet, who has remained very much out of the public eye. Would the public accept her?
There's also the question of whether the French public would be willing to accept the wife of the president in such a prominent role?
The debate surrounding the 'first lady' issue has been raging for decades and as recently as May 2016, only 31% of people were in favour of creating an official position for the 'first lady', according to a survey by Ifop.
Brigitte has proved to be popular among Macron's supporters, who regularly chanted her name throughout the campaign. But what about the general public?
“We elect a president and not a couple,” Professor of Constitutional Law, Bertrand Mathieu told Le Parisien recently.
“The more visible Brigitte Macron is the more things could be complicated for her,” said author Bouilhaguet. “The French would detest the idea that she had any influence over the president, but if she takes up charitable work then that could work her.”
Ceremonial handover
Brigitte Macron's for the moment unofficial role as France's newest “first lady” will begin on Sunday when her husband is officially inaugurated.
In previous years, the visibility of the new president's family during the all-important ceremonial handover has varied.
Nicolas Sarkozy's wife Cecilia and their children featured prominently during his swearing-in, while Valerie Trierweiler kept her distance during Francois Hollande's inauguration.
Nobody is doubting that Brigitte will be anywhere but by her husband's side on Sunday when he becomes the eighth president of France's fifth republic.
And while it is unclear whether her role during his five-year term will ever be official, it will clearly be significant to France's new head of state.
“Brigitte Macron is extremely important to her husband as a coach or mentor and a facilitator and likes to debrief her husband after his rallies and interviews,” says Bouilhaguet. “She is omnipresent and that's been non-negotiable.”